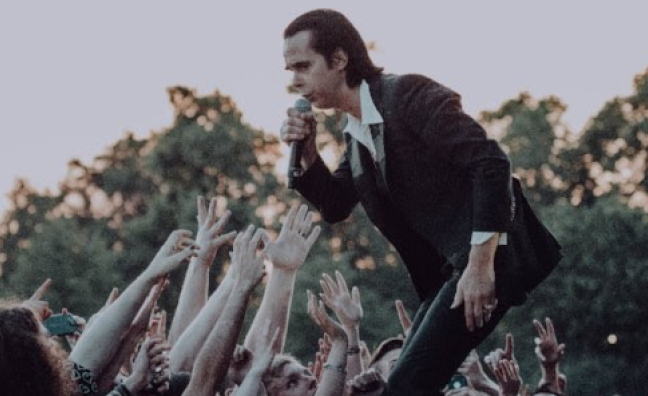 Nick Cave And The Bad Seeds manager Brian Message has spoken about their slow-burning rise on the live scene, which reached a new peak with last month's sold-out All Points East headline slot.

The Victoria Park date featured support from the likes of Patti Smith, Courtney Barnett and St Vincent, along with a surprise guest appearance from Kylie Minogue, who duetted with Cave on their 1995 duet, Where The Wild Roses Grow.

It was Cave's biggest headline slot yet on these shores and followed his first UK arena tour last year.

"We live in a world where people can share really easily and anyone who goes to a Nick Cave And The Bad Seeds show, on the whole, is going to share that experience," said ATC Management's Message. "To some degree, I think that’s what’s been going on – a lot of people sharing and other people going, ‘Wow!’”

The band’s most recent LP, 2016's Skeleton Tree is their highest-charting in the UK, peaking at No.2 and selling 74,110 copies to date, according to the Official Charts Company.

“[Cave] seems to get better and better, like a fine wine," added Message. "He’s fit, he works with his voice, he’s a proper professional so he’s really risen to the occasion on that front. And he’s a remarkable performer, he electrifies audiences, so that helps in a big way.”