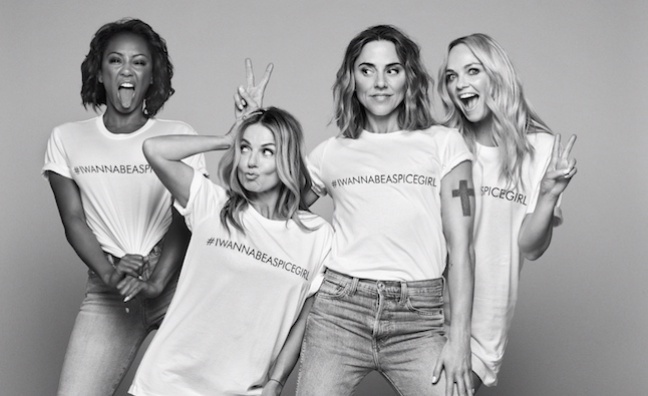 A week on from the Spice Girls' reunion announcement, girl power is officially back. Ticketmaster revealed that the stadium tour has broken sales records after shows went on sale on Saturday (November 10) - more dates have now been added to the run next summer.

In the latest issue of Music Week , we go inside the biggest pop comeback since Take That with key players including Simon Fuller, Modest Management (who oversaw One Direction’s global success) and promoter SJM - and we even get Gary Barlow’s advice for the Spice Girls on staging a successful reunion.

Since the tour announcement, the Spice Girls have also unveiled a T-shirt campaign to raise funds for Power Up, a gender justice campaign backed by Comic Relief. Here, Modest co-founder Harry Magee takes Music Week inside the comeback and says their message of equality can inspire a new generation…

How did Modest get involved with the group for this reunion?

“Simon [Fuller] was looking for a management partner for the Spice Girls, particularly in the live area, somebody that had experience with scale and international [acts]. We had several meetings and we put together various scenarios internationally. In subsequent meetings, we talked and they decided they just wanted to do the UK to start with to see whether it was going to work in terms of them enjoying it. We’re looking at Australia and North America and Europe. Nothing else is planned but if these [UK shows] go well, then we’ll obviously open up these conversations in the second bit of the last quarter of next year and probably going into 2020. If it works, if the girls enjoy it, we would look at it as a two- or three-year plan, and in conjunction with that there is the opportunity to elevate the Spice Girls brand even further through other mediums.”

Where do you see the ambitions beyond this tour in recorded music?

“I think the impact of it is quite inspiring to them. Honestly, they’ve all got other things, they’re individuals, they’ve got kids and all have other jobs but watching them together, there is something very special about it. In terms of other things with the music side, there might be something in the future if it all goes well. If the interest is maintained in this, then I think the girls will be inspired to do other things.

“They inspired a generation and the reaction to this announcement kind of bears that out. It can transcend a generation and it can also inspire a new generation. I don’t think it’s purely about the nostalgia, it’s something in the girl power thing which is so relevant to now. I think that it has connected very well.”

If the interest is maintained in this, then I think the girls will be inspired to do other things

The business itself has obviously changed a lot since the Spice Girls’ last tour in 2007-08. How can you ensure they adapt to that?

“We have certainly put a focus on that. We’ve put our best digital person on it and we have a digital marketing agency as well and a digital PR agency, so obviously that’s a big focus on social. We can do all kinds of things in terms of streaming, probably around the time of the shows is the time to do that. I am sure Universal will be having ideas on how to capitalise on it.”

Do they technically not have a record deal at the moment?

“That’s correct. I think their brand is so strong that maintaining ownership and doing things on their own terms will be the mantra going forward - depending on what they want to do.”

Are their ambitions for the tour to continue in the longer-term?

“I think the girls would like it to so obviously we’re hoping that this trajectory goes to new heights and the enjoyment of it will continue. There will be a conversation about taking the tour into other territories, definitely. The amount of stuff that has come in the last two days, whether it’s from brands, fashion companies, merchandisers, there is a lot of interest going around.”

Do you sense that Victoria Beckham’s absence from the tour is having any impact?

“No, I really don’t. It’s not a detriment to her, it’s just the positioning of it and the timing of it is giving it a relevance. It’s the group and the name of the group and what that stood for that has got that relevance and that has got people excited. The girls have got something to say and they’re excited by it. This week has taken it to a level past everyone’s expectations."

To read the full Music Week report on the Spice Girls’ comeback pick up the latest issue - or subscribers can click here. To subscribe and never miss a big industry story click here.