'It's a significant career peak': Nick Cave And The Bad Seeds prepare for O2 Arena show 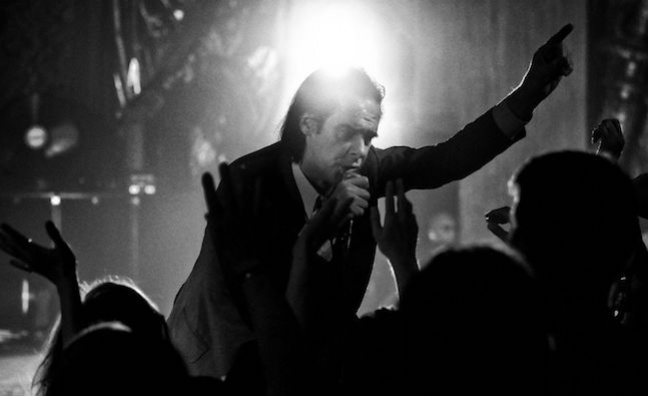 Nick Cave And The Bad Seeds wrap up their UK tour with a sold-out O2 Arena concert on Saturday (September 30) – their biggest London show in a career going back more than three decades.

“It is the first time [at the O2] – long overdue,” drummer Jim Sclavunos told Music Week. “It’s a walk in the park – it’s just another room.”

The eight-week European tour kicked off at Bournemouth’s International Centre on September 24 and took in dates at Manchester Arena, The SSE Hydro Glasgow and Nottingham Motorpoint Arena. The continental leg starts at Paris Zenith on October 3.

“This tour represents a significant jump up for the Bad Seeds,” Ian Huffam, the band’s agent at X-ray Touring, told Music Week. “The demand for tickets has far exceeded supply across Europe and the performances have - almost impossibly - gone up to another level. I am overjoyed for them. The London show is a significant career peak for the band as are many of the continental shows.”

The tour is the first UK live performance of last year’s Skeleton Tree album. This year the band partnered with BMG and ADA on Nick Cave and the Bad Seeds - Lovely Creatures: The Best of 1984-2014. The box set spanning the band’s 30-year career was hand-picked by Nick Cave and founding member Mick Harvey, with help from the current Bad Seeds. The collection has sold 17,605 copies, according to Official Charts Company data.

“It was really interesting to see it all come together, so much time passes and you just don’t keep track of what you’ve done, then you look back and say ‘that’s pretty cool, I forgot all about that’,” said Sclavunos. “BMG are lovely and ADA especially has been very involved in the whole project and in touch with us about everything – they were lovely to work with.”

Lovely Creatures won the special catalogue release of the year at the Aim Awards this month.