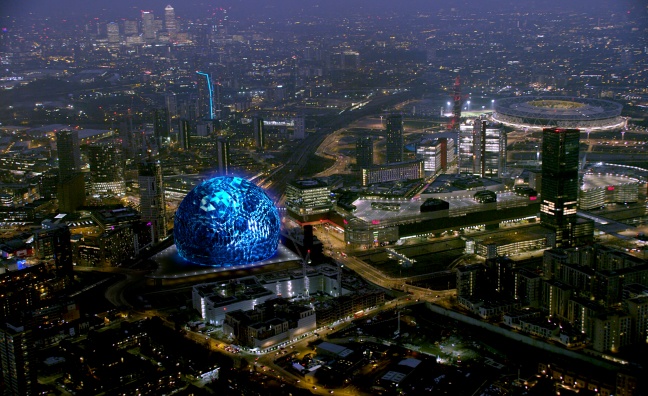 The company is pressing ahead with plans to make London the home of its first international venue after acquiring nearly five acres of land in Stratford - next to Westfield Stratford City shopping centre - for £60 million. The 18,000-seat arena will be based on the same design as the first MSG Sphere, set for Las Vegas, Nevada.

The plans were previewed at a special invite-only event held last night at the Copper Box Arena in Queen Elizabeth Olympic Park. Led by MSG executive chairman Jim Dolan, it was attended by a host of top UK promoters.

“I think it’s going to revolutionise the live entertainment business,” said Lustgarten, speaking to Music Week immediately after yesterday’s presentation. “We are hoping this will be the busiest venue in the world; we know it’s going to be the greatest entertainment venue in the world - and we are really excited,” he added, laying down the gauntlet to current market leader The O2, operated by US rival AEG.

AEG, which also runs SSE Arena, Wembley, holds the exclusive rights to stage music events in Hyde Park and Victoria Park, and co-owns the Eventim Apollo in Hammersmith, issued a statement earlier this week insisting it did not oppose the principle of a new venue in the capital, but queried the proximity of MSG's proposed new building to existing sites.

"It is imperative that MSG’s proposals do not add to congestion in the area, especially on the Jubilee Line, which is critical for the movement of guests to and from The O2 Arena,” said an AEG spokesman.

Lustgarten fired back: “We we’re surprised to hear about that because there are three venues owned by AEG across the whole city. We look at this site and see five tube and rail offerings, a great bus service, parking next to Westfield and Crossrail. We think it is going to be very easy for everyone from across the city to make it here.”

The development is the latest twist in the ongoing dispute between rival live music companies AEG, Azoff MSG Entertainment and Live Nation, which began when Azoff MSG reportedly started refusing to book acts into its prestigious Madison Square Garden venue in New York unless they also played the company’s Los Angeles venue, The Forum, over AEG’s Staples Center. AEG  hit back, informing agents and promoters that artists that choose The Forum over the SC would not be booked into The O2.

“This is not about a competition, this is about growing the market,” said Lustgarten of MSG’s UK plans. “London already has a thriving entertainment business, we just hope to add to it. Look at New York, a city of the same size. We have over twice as many concerts in the New York market than in the London market. It is similar in LA and on top of that we are going to have more than just concerts, we are going to have other forms of entertainment, so there’ll be no problem.”

A series of technology demonstrations at yesterday evening’s presentation offered a tantalising glimpse at the immersive experiences the new venue could provide. A planning application is expected to be submitted in the autumn.

MSG's other venues include New York's The Theatre at Madison Square Garden, Radio City Music Hall and Beacon Theatre; the Forum in Inglewood, California; The Chicago Theatre; and the Wang Theatre in Boston.