'It's not really a song': New Order on Blue Monday and their synth orchestra experiment 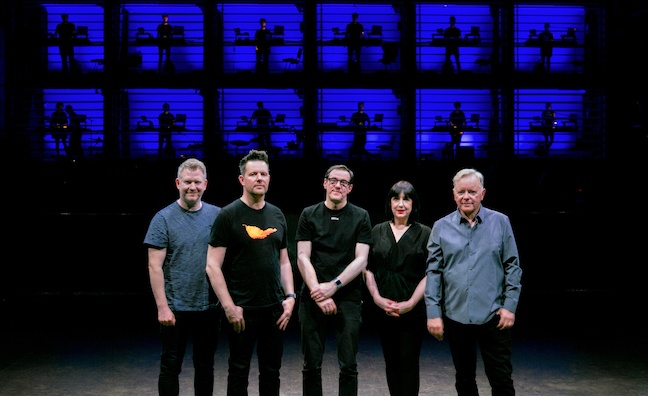 In a major new documentary, New Order have opened up about their catalogue and the decision to leave out classic songs from their live show with a 12-piece synthesizer orchestra.

The So It Goes… collaboration with artist Liam Gillick premiered at Manchester International Festival last year, and the band have since taken it on the road in 2018 for select dates in Turin and Vienna.

The re-staging of their Manchester collaboration was captured in feature-length-documentary New Order: Decades by Mike Christie, which aired on Sky Arts.

“The first part of the process was really just emptying everyone’s minds of what had previously been done and how these things should work, and then filling that vacuum with lots of ideas,” said co-curator Dave Haslam. “New Order then came up with more or less this idea that they would like to do a synthesizer orchestra.

“The whole thing is so ambitious and it doesn’t fit into any one category. It’s not like New Order’s agent could phone one of the big rock promoters in any one city. But New Order weren’t going to compromise.”

Drummer Stephen Morris described it as “quite a complicated thing to pull off”.

“It’s not entirely been fun, a lot of it has been quite traumatic,” he said. Morris ended up working closely on the production, based on Bernard Sumner’s idea for a wall of synthesizers.

“What we didn’t anticipate was how long choosing the songs would take,” said Sumner. “It took about three days of listening to everything. I wouldn’t say it was enjoyable, I wouldn’t say it was arduous - it was quite revealing. We picked the ones that were good but also the ones that we thought would be suitable for a synthesizer orchestra. They had to have a certain amount of keyboards.”

Morris said they often went for the “most difficult” options. They played Joy Division songs Disorder, Heart And Soul and Decades, though ended up leaving out classic songs such as True Faith and Blue Monday.

“It’s a funny one Blue Monday,” said Morris. “It’s not really a song. If you try and make it get too musical, it loses something somehow. It gets a little bit too posh for its own good.They could have played it but it would have been very hard because there’s not much in it.”

New Order play a regular show at Alexandra Palace on November 9, in addition to dates in the US and South America.

Share in the creation of a collaboration unknowling decades in the making.