'It truly is a takeover, not just a music event': Inside Boy Better Know's O2 mega show 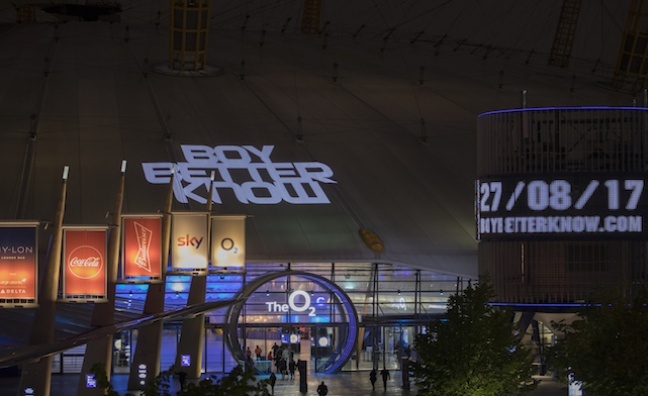 In the new issue of Music Week, we deliver a very special look at The Business Of Grime as the genre enters uncharted territory this weekend with its biggest show to date - the Boy Better Know Takeover at The O2 in London. BBK, which comprises Skepta, JME, Wiley, Jammer, Maximum, Solo 45, Frisco and Shorty, will headline a bill that also includes the likes of J Hus, A$AP Rocky, Ghetts, CasIsDead and Chip. BBK Takeover is being co-promoted by Festival Republic and Rob Hallett’s Robomagic.

“It truly is a takeover, not just a musical event,” Robomagic CEO, Hallett told Music Week of the Takeover, which is set to take control of the O2’s music venues, bars, cinema, restaurants and communal spaces on August 27.

“Nike is putting a five-a-side football pitch in the quadrant outside, we’re building a skate park and we’ve got the world premiere of the new Call Of Duty [video game],” explained Hallet. “We’re turning Building Six into a roller disco, we’ve got the cinema showing Noisey films from Vice, we’ve converted one of the restaurants into a vegan restaurant... It is truly a takeover, not just a musical event. It’s a real urban lifestyle event. I hope it will run for the next 10 years, be a catalyst and plot the course of the rise of the genre.”

BBK Agent, Rebecca Prochnik from Earth Agency, told Music Week that the takeover was intended to reflect “more of what BBK is”.

“The idea has been there for years - to do something 3D that reflected all that they are, or at least more of what BBK is, rather than just a straight-forward concert,” said Prochnik. “It was just a matter of finding the right space. [The O2] has an inbuilt structure that allowed us to do what we wanted perfectly, without having to create it from thin air.”

Prochnik also stressed the non-traditional approach of BBK - who will receive AIM's Innovator Award this year - adding: “The takeover at the O2 is not about trajectory - though it is perceived as a huge step, statement venue for artists, the reason for taking this space was not for those purposes. It was because it provided the scope as a space to do a full, multi-disciplinary and full-day event.”