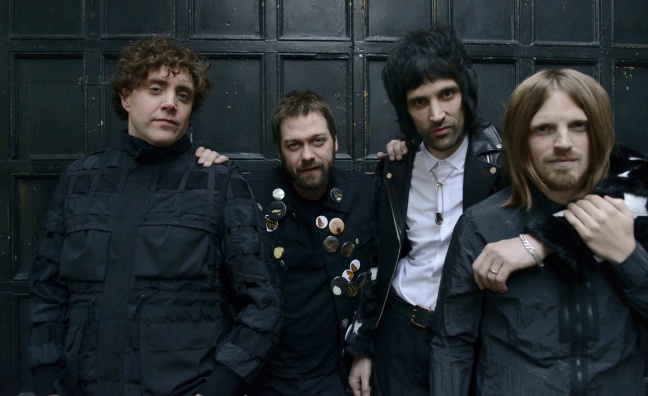 Kasabian and Courteeners have been unveiled as the first headliners for 2018’s Teenage Cancer Trust concert series at the Royal Albert Hall.

The two bands become the latest in a group of more than 235 artists – ranging from Paul McCartney, Noel Gallagher and Damon Albarn, to Florence + The Machine, Tine Tempah and Ed Sheeran – to have played the event since its launch in 2000.

Courteeners, who supported Gallagher at the event in 2010, will play on March 23, while Kasabian will perform on March 24. To celebrate the 10th anniversary of St Jude (185,250 sales, OCC), Courteeners will play the album in full.

The Who’s Roger Daltrey, who conceived the event, said: “I’m really pleased to announce the first shows for The Teenage Cancer Trust at the Royal Albert Hall next March. This will be the 18th year of these concerts for the charity. Courteeners are doing one show in Manchester and we can't thank them enough for choosing Teenage Cancer Trust at the Royal Albert Hall as their London show. It's going to be a very special night. It's great to be welcoming back Kasabian, they have been fantastic supporters of this charity since they first headlined for us back in 2007.”

Courteeners frontman Liam Fray said: “It’s a great honour and privilege to perform for such a brilliant charity at such a legendary venue,” says Liam Fray, “This will be the first and last time we’ll ever perform our debut album St. Jude in full in London and we’re really pleased to be doing it for a such a great cause."

Kasabian's Tom Meighan added, “We love playing the Royal Albert Hall for the Teenage Cancer Trust.  It is a show we have come back to throughout our career for the special atmosphere and the amazing cause.  Our fans love it and we do too, it will be a highlight of 2018 for us.”

Tickets go on sale at 9am on Friday (December 15).