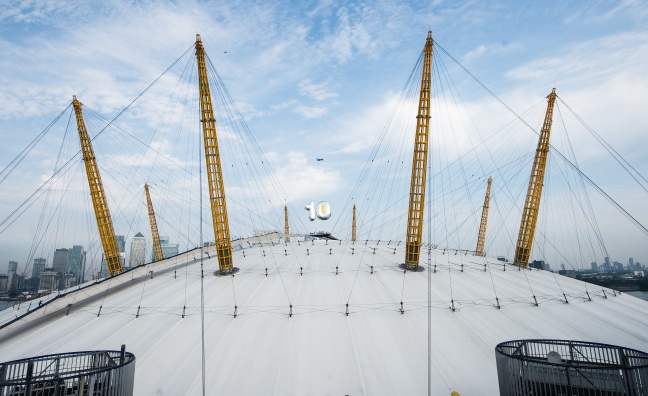 Live Nation has filed a complaint with the Competitions & Markets Authority against its rival AEG Live.

The approach to the regulator relates to a dispute between AEG Live and Azoff MSG Entertainment that may have prevented global touring acts from booking appearances at London's O2 Arena.

Music Week broke the news that The O2 had been drawn into the row over an aggressive Azoff MSG booking strategy earlier in the summer. The turf war began in the US when Azoff MSG reportedly started refusing to book acts into its prestigious Madison Square Garden venue in New York unless they also played the company’s Los Angeles venue, The Forum, over AEG’s Staples Centre.

In response, AEG said its “hand has been forced” and it planned to “level the playing field”. In effect, that meant informing agents and promoters that acts choosing The Forum over the SC would not be booked into its London venue, The O2. Having responded by taking MSG’s side and accusing AEG of anti-competitive behaviour, Live Nation has now made a formal complaint in the UK.

"The UK Competition & Markets Authority has advised us that they have received a complaint from Live Nation,” said a spokesman for AEG Live. “We will meet the Authority to discuss the matter and we believe our responses will satisfy them."

Live Nation has not commented on its complaint to the CMA. However, there are signs that the original dispute between could be resolved with Azoff telling Billboard that there is “no mandated booking link between his group’s venues, the Forum and Garden”.

AEG issued the following official statement last month: “AEG always places artists and fans first and believes that artists should be free to play whatever venue they choose. However, MSG Entertainment’s aggressive practice of requiring artists to perform at the LA Forum in order to secure dates at Madison Square Garden is eliminating that choice, which serves neither the interests of artists nor fans. After exhausting all avenues, our hand has been forced by MSG's actions and AEG will now coordinate bookings between The O2 Arena and Staples Centre to level the playing field for all. We believe that AEG’s offering of venues will provide artists the greatest financial potential and fans the best experience. While this coordinated booking strategy seeks to defend our business interests, our ultimate objective remains protecting and restoring choice for artists. Our policy is not intended in any way to deny Live Nation, or any other promoter, access to The O2 arena. To the contrary, we desire to bring as much content as possible to all of our venues and we will continue to actively seek concert bookings at The O2 from all promoters including Live Nation.

“Live Nation’s threat of antitrust action in response to our booking policy is the height of hypocrisy coming from a company that publicly boasts about its control of content and distribution as the world’s largest concert promoter and ticketing company and one of the world’s leading artist management companies. As evidenced by a parade of antitrust lawsuits, regulatory investigations and an antitrust consent decree that have followed the company over the years, Live Nation has a well-earned and widespread reputation for resorting to aggressive tactics, including threatening to withhold its content, as it continually seeks to enhance its dominant market position in these various sectors. Given its asserted market dominance, we find it astounding that Live Nation would have the audacity to complain merely because it finds itself agitated by a competitor’s business response to heavy-handed tactics in which Live Nation has participated. Not only did Live Nation not complain about MSG’s tying of the Garden and the Forum, but it actively encouraged and supported that policy because it suited Live Nation’s interests in driving content away from a competitively ticketed building to a Ticketmaster building, which, in the process, succeeded in sending a very loud message to the live entertainment industry - how well equipped Live Nation is to punish any buildings that dare go with a competing ticketing provider. Notwithstanding Live Nation’s recent threats to pursue legal action and deprive AEG venues of shows, we fully intend to proceed with our new booking policy. We are highly confident of the legality of our booking policy and will vigorously defend any misguided attempts by Live Nation to use the courts or the regulatory system to combat a practice they have aggressively pursued and benefitted from elsewhere.”