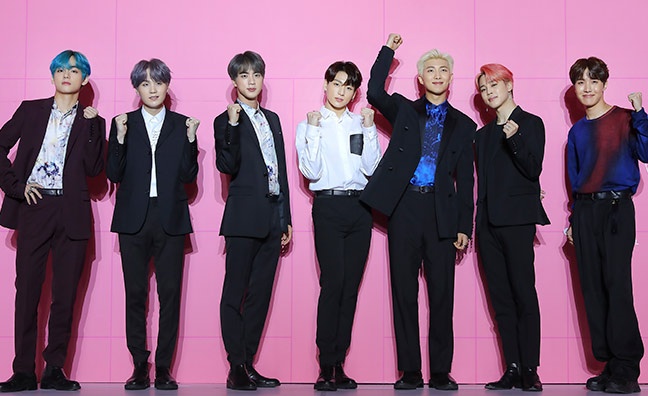 BTS promoter Phil Bowdery has told Music Week the K-pop phenomenon's step up to stadiums is reflective of the growth of the genre in Europe.

“They asked the question, ‘What do you think our next move should be?’ And I didn’t hesitate in replying, ‘We have to do stadiums here’,” explained Bowdery, Live Nation’s executive president, European touring, speaking in the latest issue of Music Week.

“We may look to extend in the future, but at the moment the only two European cities they are playing are Paris and London. They are playing the most iconic venues in both countries.”

It's a phenomenon and you have to embrace it

The promoter, who also works with Blackpink and staged two dates with Big Bang at Wembley Arena back in 2012, predicted that K-pop will continue to grow in the UK.

“I don’t see it as something that is going to pass very quickly because there are other acts penetrating via social media,” he said. “The world has become a much smaller place for these type of acts. It’s a phenomenon and you have to embrace it.”

BTS made history last Friday as the first Korean group to score a UK No.1 album, with Map Of The Soul: Persona, racking up 26,498 combined first-week sales, according to the Official Charts Company (the EP has dipped to No.4 in latest midweeks), while new single Boy With Luv, a collaboration with Halsey, charted at No.13 (27,216 sales).

“We did a bit of educating on the social networks on how to navigate the website a bit better, because it could have been slightly misleading if you were in a panic to buy tickets,” said Bowdery. “So the second show sold out 25 minutes quicker than the first."

Click here to read the full interview with Bowdery on the growth of K-pop in the UK.