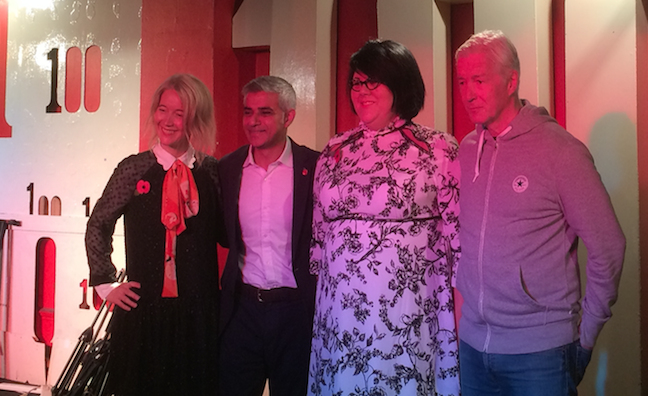 Newly appointed London night czar Amy Lamé has described the challenge of reducing the number of live venue and nightclub closures as her “total priority” in a conversation with Music Week.

Her appointment was announced by London mayor Sadiq Khan last Friday at iconic London venue the 100 Club, where he lamented the loss of so many, stating: “Think about all the great artists not being inspired because of clubs and venues closing down.”

Tasked with boosting the city’s night-time economy and establishing London as a truly 24-hour city, the writer, performer, presenter and LGBTQ campaigner certainly has a hefty job on her hands, but a quick glance at her CV suggests she is more than up to the task.

In 1995, she co-founded club-night and performance collective Duckie, which runs every Saturday night in The Royal Vauxhall Tavern, a venue that was recently saved from closure following a campaign led by Lamé. She maintains strong links to Britain and London’s LGBTQ communities and has performed her various one-woman shows across the country.

Between 2010 and 2011 she filled the ceremonial role of Mayoress of Camden, promoting the borough’s live music venues and nightclubs and working with the local authority and a diverse mix of communities.

Speaking to Music Week, Lamé, Khan and deputy mayor for culture Justine Simons outlined their plans for boosting the capital’s nightlife and ensuring its future prosperity.

Priority No.1, it seems, is safeguarding the future of live music venues and nightclubs.

“It’s probably the greatest issue that people have brought up in terms of what’s affecting London nightlife,” Lamé said. “I’m making it a total priority. I will be bringing my wealth of knowledge of running a club and being a part of the campaign to save the Royal Vauxhall Tavern to the role and carrying that across the rest of the capital. One of the big challenges I’ll have as night czar is to stem that flow, but it’s a challenge I’m fit and ready to fight for.”

“It’s worth reminding ourselves that in the last five years we’ve lost 40% of live music venues,” added Khan. “Look at the 100 Club; not just the great bands that have performed here and inspired others, but also the small bands who perform here on a daily basis. We have examples of developers building flats next door to a venue, people move in and complain about the noise, then the council says to the venue that they have to noise insulate their premises. They can’t afford to, so they sell up. One of the ideas we looked is the agent of change principle, where if you want to build something next to a live music venue YOU have to pay for the noise insulation rather than the venue.”

Simons also highlighted the value of small music venues to the future of UK talent.

“Live music venues are incredible for punters but also they are really vital talent incubators. Shortly we’ll be working the Music Venues Trust and releasing some fantastic statistics to really demonstrate in hard economic terms the value of live music venues.”

Part of the plan to protect such venues is the implementation of new planning legislation, which will prevent owners from selling the property for any other use than as a music venue.

“There has to be an exceptional reason to change use,” said Khan. “At the moment you may own a live music venue as a property owner and you then sell it to become luxury flats to make more money. We’re going to make it difficult for you to change the use of the property.”

He also addressed the night tube and his plans to extend the service.

“The night tube is a great opportunity,” he said. “The great thing about Amy’s plan is that she isn’t going to limit herself to Zone 1. She wants to go all across London, because live music venues aren't only in Zone 1.”

On the subject of Fabric and other nightclubs facing closure, both Khan and Lamé outlined the need for greater communication among all parties concerned in order to make sure similar problems do not arise with other clubs across the city.

“I’m very keen to open up the conversation to everyone to see what their concerns are and how we can make London truly a fabulous 24-hour city,” Lamé said.

“It can’t be beyond the wit of us in future cases to get the nightclub owner, the council, the licensing committee, the police, the residents and others together to discuss these things before it becomes a problem,” Khan commented. “I’m fed up of having conversations about how we are going to stop pub A closing down, or nightclub B closing down, or live venue C closing down. I want the conversation to be, We are opening a new nightclub, we are opening a new venue. We want to give you the confidence we are on the right trajectory.

“Councillors do what they think is right for residents. The police are doing what they think is right around crime and anti-social behaviour. Venue owners are doing what they think is reasonably right to make a profit. We have to have an ecosystem that works for everyone. There is no other massive city like London with a night czar or a night mayor. Amy is the first; that shows our commitment to nightlife in London. The economic case is inarguable, but it’s about what sort of life you want to lead. Do you want to live in a city where things end at 8pm or 10pm? We have to balance competing interests.”

So just how much of an influence have the night mayors of other cities had on the remit of London’s night czar?

“We’ve worked really closely with the Amsterdam, Berlin and San Francisco night mayors, so we have a coalition of world cities who are looking at this issue,” Simons explained. “I think we’ll see more and more cities take on these posts. There is a real appetite for it. Amsterdam has been doing this for years and they’ve shared all their advice and ideas with us, so it really has informed the job description and what we’re doing, but we have to tweak them and make sure they’re right for London, because London is a really big city compared to all the others that are doing this.”

Last of all, why the name ‘night czar’? Khan explains.

“We thought about a night mayor, but London’s had one of those for the last eight years! So we went for night czar; she’s not quite Rasputin but she’s brilliant. The name doesn’t really matter; the point is, now London’s nightlife has a champion, an advocate and a fighter. And she will say boo to a goose. She’ll make sure she gets heads round a table, knocking them together if need be. She’s got huge experience doing this job.

“Justine had the invidious task of going through hundreds of applications from those in the music industry, DJs, musicians, experts, journalists, former police officers, some jokers as well. It was a tough task but we made the right choice.”