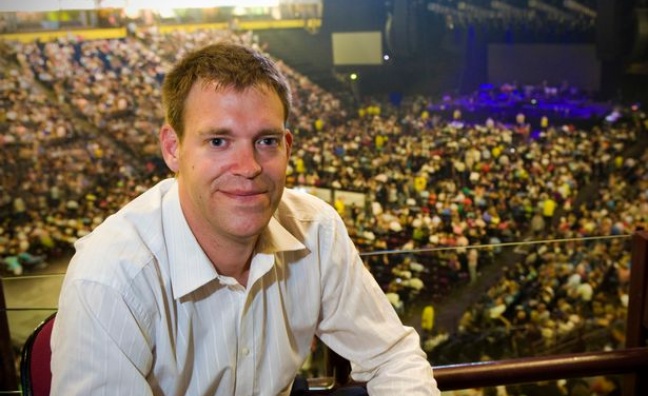 Manchester Arena re-opens for business tomorrow with the We Are Manchester benefit concert - the venue's first show since the May terror attack.

Promoted in-house, the gig will honour those affected by the bombing. Profits will be donated to the Manchester Memorial Fund, a charitable trust overseen by the Lord Mayor of Manchester, which will go towards establishing a permanent memorial.

"A lot of people came to us saying, We've got this great idea for a show. But we said, This will be our show, on our terms and we'll have full control over it," the SMG Europe-operated venue's general manager James Allen (pictured) told Music Week.

"SMG in America underwrote the concert, we worked with EMO as our production company and people such as Conrad Murray and Simon Moran at [Manchester-based] SJM concerts have helped us get some great acts, hence, we were able to sell out the initial allocation of tickets in under 15 minutes."

Allen paid tribute to the victims of the May 22 atrocity and said he had been buoyed by the resilience shown by the city in its aftermath. "Manchester is amazing," he said.

"While it happened on our doorstep, this was a bigger than an arena - it was very much a city thing. There are not many people that you bump into walking around Manchester that have never been to a show here, so they can all relate to what happened and also to the fact that they've had some great experiences in this building.

"Of course, the hotels and the restaurants will be very pleased that we're back open; the city council has been fantastic in assisting us to open as quickly as possible and the contractors that have worked with us have been brilliant."

Although no structural damage was caused to the arena, 23 shows to take place at the venue between May and August were cancelled or moved to other venues in the wake of the tragedy. These included Take That, who merged their planned three arena dates into one show at the Etihad Stadium; Radiohead, whose two arena shows became one night at Emirates Old Trafford and Blink-182, who moved to the nearby Castlefield Bowl, while Nashville staged two performances in one day at O2 Apollo Manchester.

"The incident took place outside the building so the majority of the work that has taken place is outside the venue," explained Allen. "We were back in the arena within about a week-and-a-half and our initial thoughts were, Could we open up earlier than we actually are doing? But then when you start to pick at what needs doing and what needs assessing, we realised very quickly that was not possible."

Allen has been grateful for the support he and his colleagues received from within the live industry in the days and weeks following the attack. "We were inundated with messages of goodwill and support," he said.

"We are desperate to reopen," added Allen. "At the end of the day, putting on shows is what we do and we’ve got a very strong autumn that we need to fulfill.

"I hope people enjoy themselves [on Saturday], reflect on what has happened, celebrate Manchester, celebrate that the arena has reopened and generally have a great night."

This week's Music Week cover story, in which Allen discusses the ramifications of the terror attack for venue security, along with other issues, can be accessed here.