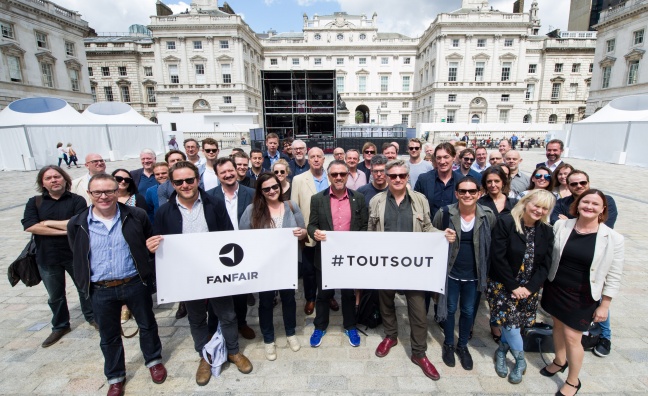 Labour MP and staunch anti ticket abuse campaigner Sharon Hodgson has welcomed the launch of the FanFair Alliance, the new campaign which is lobbying the government to clamp down on online touting.

Hodgson, who is co-chair of the All-Party Parliamentary Group (APPG) on Ticket Abuse, said she looked forward to working with the group, which is comprised of a cross section of managers, artists and trade bodies.

“For too long fans have been ripped off by ticket touts and the government have continually failed to offer support to fans to put them first, through ensuring legislation is properly implemented and has the teeth to protect fans from the abuses seen in the secondary market," said Hodgson.

“The launch of FanFair Alliance so soon after the publication of the Waterson Review which called on the Government to do more in this area, is welcome news and will provide fans with a way to voice their concerns with the secondary market. I hope many fans will sign up to this campaign by visiting their website.

“I look forward to working closely with FanFair Alliance to ensure Parliament can help voice the concerns of fans with Government and in order that fans are put first once and for all.”

Launched today (July 14) at a packed press conference at Somerset House, London, by the managers of Arctic Monkeys, One Direction, Mumford & Sons and PJ Harvey, the FanFair Alliance represents a concerted effort from the industry to tackle touts and protect consumers.

"[Ticket touting] was the thing that motivated fans to write to us expressing their anger and frustration," said Wildlife Entertainment's Ian McAndrew, who manages Arctic Monkeys. "It remains today, probably, the number one grievance that's expressed by music fans in their experience of going to live events.

"There is already current legislation that is designed to protect consumers. The issue that was highlighted in the report is that legislation is not being enforced. So again one  of the principal aims of the FanFair Alliance is to put pressure on Trading Standards and the other authorities including government to enforce that legislation."

Harry Magee of Modest Management, which represents the likes of One Direction, Little Mix and Olly Murs, said: "The backlash that comes from the price of tickets going on the secondary market always ends up with the artist. A lot of thought goes into pricing tickets for fans with ourselves and the artists and the promoters, and for such a distortion in the marketplace and confusion for those consumers to take place is very damaging and continues to escalate."

Mumford & Sons manager Adam Tudhope added: "I've talked to all of our artists about this issue and for them it begins and ends with the fan. I think fans being disgruntled by the process could have very bad long-term effects on the market as a whole."

Brian Message, of Courtyard Management, who manages acts such as PJ Harvey, said: "Some of our research for example has shown that when the Black Sabbath tour went on sale something like 11,000 tickets were up on secondary ticketing sites the same day as effectively the rest of the tickets were up. That's an unacceptable practice.

"Ian, Harry, Adam and myself are directors of the Music Managers Forum and I think we'll be looking for the Music Managers Forum to be engaging with government, not only to drive forward how we properly police the Consumer Rights Act, which was introduced last year but has no teeth and cannot be policed as it stands. But also to get those corporations, in particular in this area, Live Nation and Ticketmaster, to come with us and help us drive some solutions."