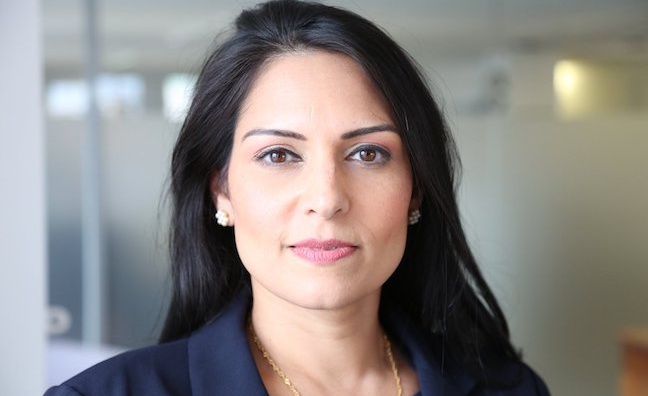 The government has set out plans for a new points-based immigration system that is set to impact the music sector.

The measures announced by Home Secretary Priti Patel are scheduled for 2021 and would end freedom of movement, as well as reforming UK immigration policy.

At the moment artists from the EU can travel freely to the UK, but they will need visas from January 2021. The governement has indicated that such 'specialist occupations' will be subject to the same Tier 5 visas that currently apply to touring musicians from outside the EU. It means there is now little chance for a reciprocal arrangement with the EU such as the proposed Musicians' Passport by the Musicians Union, unless the government makes concessions.

UK Music acting CEO Tom Kiehl said: “New plans confirm that from 2021 EU musicians coming to the UK for concerts and festivals will be treated in the same way as those from the rest of the world. This will drag some agents and promoters into the immigration system for the first time and increases the possibility that member states introduce new bureaucratic hoops for UK musicians to jump through when seeking to perform across the EU.”

Geoff Taylor, BPI and BRIT Awards chief executive, said: “We understand government’s desire to bring in new immigration rules that treat visitors from third countries equally and that control migration levels. However, we are confident government also wishes to ensure that UK creative companies can work with the best talent, and that UK artists should not face unreasonable bureaucracy in touring or promoting their music in the EU.

“We will continue to engage with government to try to ensure that formalities for short term touring or promotion are kept to a minimum.”

“It’s welcome the Government has reduced its salary cap yet these proposals will still not work for many in the EU who want to work in the UK music industry over a longer period of time given musicians average earnings are £23k and a reliance in the points based system on the need for elite academic qualifications,” said Kiehl.

Deborah Annetts, chief executive of the Incorporated Society of Musicians, said: “The value of the creative industries has been proven once again by the Government’s own figures - growing at more than five times the rate of the wider UK economy and generating almost £13m per hour. The creative industries are worth in excess of £111bn per annum.

“We are deeply disappointed that free movement for musicians and other artists from the EU has been ruled out and we would ask the UK Government to reconsider our call for a two-year, multi-entry visa. As the former Minister of State in the Department for Digital, Culture, Media and Sport, Nigel Adams said last month, ‘touring is absolutely the lifeblood of the industry’. This latest development will mean that artists visiting the UK from the EU for work will need to apply for visas, including Tier 5, or pursue a route for short-term business visitors such as the discredited Permitted Paid Engagement (PPE).”

She added: “Any future immigration system does not exist in isolation and has huge implications for the negotiation of EU and US trade deals and reciprocal arrangements. It is vital that any immigration system supports musicians who will need to tour in the EU post-Brexit. We urge the Government to listen to the creative sector to ensure that the “broader unsponsored route” works to support the UK’s creative industries and those in the EU who together generate so much wealth for the UK.”

Caroline Norbury, CEO of the Creative Industries Federation, said: "The immigration system proposed by the government yesterday, for both long-term and temporary migration, is not the broad outward-facing system that is necessary to attract the international creative talent so vital to our sector. The concerns highlighted by the sector to the Migration Advisory Committee last autumn have not been addressed and it is additionally worrying that we understand the government intends to bring this bill to parliament in the next two to three weeks, without the normal period of consultation.

“The proposed salary threshold is particularly unsuitable for international freelancers working long-term in the UK. One in three workers in the creative industries is a freelancer (compared to the national average of one in seven).  These individuals would still have to earn at least £25,600 each year despite the natural income fluctuations expected from working across multiple projects.”