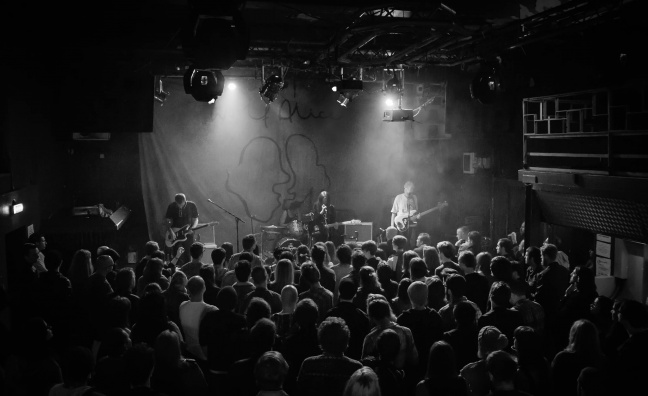 The Music Venue Trust (MVT) has announced the #saveourvenues campaign to raise money and awareness for the more than 550 UK grassroots venues currently at risk of immediate threat of closure.

The campaign follows on from last month's launch of the Grassroots Music Venues (GMV) Crisis fund, which has raised over £182,000 thanks to significant donations from Amazon Music, SJM and a number of artists and fans, following the government's advice on mass gatherings in the wake of the coronavirus outbreak.

The GMV Crisis Fund is being renamed the #saveourvenuesfund and will form part of a wider initiative that will see artists raising money for individual venues with whom they have a personal connection.

Speaking to Music Week, MVT chief Mark Davyd said: "The concept is organic and representative of the circuit itself. What we're all about in the grassroots sector is making the show happen, providing the space for artists to do what they want and giving them the space to develop.

"We realised that, actually, we're a big community and the community can come together to try and defend itself. There are lots of artists that have come out of this community that have gone on to big success. But it's not just about them, we want to appeal to all of the artists, whatever level they're at, that care about these venues and the audiences and the local communities that care about them.

"Sitting alongside anything the government's doing to help and frankly anything that we, as a national organisation can do to help, little communities of artists and people can try and save their local venues."

Artists are encouraged to choose a venue that is currently in crisis from an interactive map and dropdown menu, which can be found from midnight at www.saveourvenues.co.uk. They will then be given the tools and guidance to perform an ‘at home’ gig in support of that particular venue.

Each venue will its their own crowdfunding page with a clear target of the funds it needs to raise to stay afloat throughout this difficult period. Once a target is reached any excess revenue will go to the central #saveourvenues fund to help the wider grassroots music venue community.

Frank Turner, whose raised thousands of pounds through his recent series of Independent Venue Love shows for local venues Nambucca (London), The Joiners (Southampton) the Railway Inn (Winchester) and The Forum (Tunbridge Wells), has been a major driver of the initiative.

Turner said: “The UK live music industry is staring into the abyss right now. I’m not able to save the whole thing on my own, but I decided to do a series of livestream shows to raise money for specific independent venues that I know and love, and that are in serious risk of disappearing right now. The success of these shows demonstrated the love that exists between music fans and their favourite grassroots music venues so the #saveourvenues campaign is a brilliant way of building on that and hopefully giving artists and music fans a chance to get involved and play a big part in helping them survive.”

"We've seen some incredible work by Frank Turner. If I could clone Frank Turner 100 times I could save all 500 venues probably by the end of next week," joked Davyd. "Frank's a very special guy, but there are lots of artists like him who have deep rooted connections with grassroots venues, and the venues have very loyal fanbases. Through Save Our Venues, we're saying: let’s directly support those venues. You don't need a national agency like us to save your local venue.

"Liam Gallagher could save the nine remaining venues that he played in on his first tour with Oasis just by hosting nine virtual events and saying, 'Those venues are important to me'. Lewis Capaldi has played some of these venues; Ed Sheeran's played in some; KT Tunstall done loads; there's a will from artists to  respect the work that these venues have done for them and what they'll do for future artists. All they need is the tools to do that, and Save Our Venues gives them the chance."

Music fans are encouraged to show their support by engaging with the #saveourvenues shows and donating to their local venue’s crowd funding pages but can also choose to donate directly to the main #saveourvenues fund via the campaign website.

The wider music industry is also being encouraged to donate to the main fund. Those wishing to donate in excess of £1,000 are asked to contact Davyd directly at mark@musicvenuetrust.co.uk.

Davyd said the current sitation was all the more frustrating given that the number of UK grassroots venues was finally on an upward trend following a decade and a half of decline.

"We'd turned a little corner. We finally stabilised it a couple of years ago and then actually had venues starting to open," he said. "Then of course, four months later, we're looking at the entire circuit being wiped out if somebody doesn't take action. It is bleak, there's no point in pretending otherwise - 82% of the circuit could be lost and I think the UK music industry probably wouldn't recover from that."