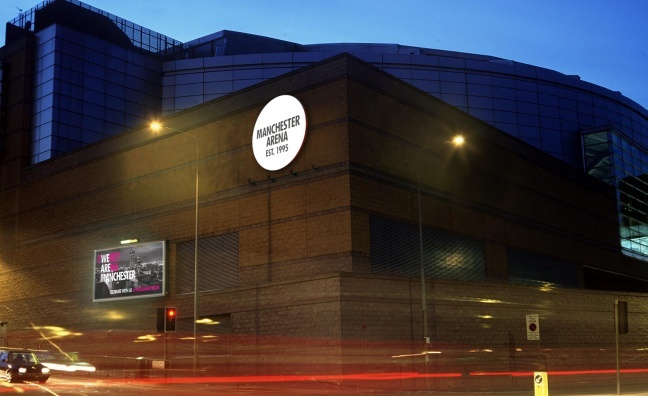 A raft of artists and music industry leaders have been paying tribute to those affected by the explosion at last night’s Ariana Grande Manchester Arena show.

News of an explosion outside the venue was reported just moments after the show had finished at approximately 10.30pm , with police currently stating that 22 people have died and around 59 others have been injured. It has since been confirmed that the attack was carried out by one man who died at the scene after detonating an explosive device.

Throughout the evening and early this morning, the international music community has been paying its respects to those affected.

UK Music chief executive, Michael Dugher, said: "Our thoughts and prayers go out to all those affected by this horrific attack. It is even more distressing that children and teenagers have been targeted. We owe a huge debt of gratitude to our brave emergency services and the venue staff. We know venues take security very seriously and do all they can to minimise risks, including training staff how to deal with major incidents. As a result of police investigations there will no doubt be a further review of these measures.

"Music has the power to bring people together and is so often a celebration of peace and love. We will not let terrorism and the politics of violence, hatred and division conquer that spirit."

Geoff Taylor, chief executive, BPI and BRIT Awards, has also commented: "Our thoughts and prayers are with all the families and music fans caught up in the horrific attack in Manchester. Music is a force for peace and love that unites us, however much those with hate in their hearts may try to divide us."

Live Nation also issued the following statement: “We are deeply saddened by this senseless tragedy and our hearts and thoughts are with those impacted by this devastating incident.”

Meanwhile, The O2 stated: "Along with everyone else, we are shocked and saddened by the terrible tragedy in Manchester. Our thoughts and prayers are with those affected and their families."

"Ariana is due to perform at The O2 on Thursday and Friday and we will advise as soon as we can as to the status of those shows."

Liverpool Echo Arena also issued a statement: "Our thoughts are with those affected by the devastating tragedy in Manchester. Our sympathies go out to everyone at this tragic time."

Many others, including Grande, have taken to Twitter to pay tribute to the victims of the attack.

Deeply saddened by the tragic events in Manchester. Our thoughts are with everyone affected. ???????? @ArianaGrande ????????

We're deeply saddened to learn of tonight's devastating event in Manchester. Our thoughts & prayers are with those affected by this tragedy.

broken.
from the bottom of my heart, i am so so sorry. i don't have words.

My heart hurts for my sister, Ariana & every family affected by this tragic event in the U.K. Innocent lives lost. I'm so sorry to hear this

I'm heartbroken over what happened in Manchester tonight.
Sending love to everyone involved. H

Our prayers and strength to the victims and their families involved in this tragedy. Stay strong. @ArianaGrande ????????

Sad, sad news from Manchester. Praying for all the victims and families involved.

Sending love to the U.K., @ArianaGrande and all of her supporters who were caught up in this awful attack. Heartbreaking.

Sending all our love to Manchester today. The news has left us speechless and heartbroken??????

Devastated, heartbroken and horrified. Such sad news to wake up to. Please stay safe and look after each other during times like this! pic.twitter.com/YmE2r6ydJB

every musician feels sick & responsible tonight—shows should be safe for you. truly a worst nightmare. sending love to manchester & ari

My thoughts, prayers and tears for all those affected by the Manchester tragedy tonight. I'm sending all my love.

Thoughts to everyone in Manchester..... just horrifying ????.

It is absolutely devastating what took place in Manchester. My thoughts and prayers are with Ariana and everyone affected. ????????????

the community we all create together thru music should be completely devoid of fear. our hearts go out to Ariana Grande & crew & the fans.

Manchester, je suis avec vous… Tout mon amour / #Manchester I am with you… All my love, Céline xx… https://t.co/NvcJM5VYjz

Manchester you are in our hearts, thoughts and prayers. Sending all love and light to those affected. Stay strong. #Manchester

So sad to hear the news from Manchester....
Prayers and thoughts go out to everyone involved..
Heartbreaking!!!!
Love to you all
M.O
X

Our thoughts and love go out to the people of Manchester ???? #StandTogether

My thoughts and prayers go out to everyone affected in Manchester.

Manchester ???? all my love and thoughts are with you. I'm so sorry this happened.

We love you, Manchester. Keeping you in our thoughts. Stay safe.

Manchester, I love you & my heart is with you, @arianagrande & all at @ManchesterArena tonight. pic.twitter.com/lopXs8H39n

Our love to Manchester, thinking of you all

Our hearts are with everyone in Manchester this morning, had some incredible times playing that arena. Unbelievably sad xx

Sending love to those affected in Manchester.

Waking up to the tragic news from Manchester. Shocking and senseless. Thoughts and prayers go out to the victims. So sad.

We are deeply saddened by the tragedy in Manchester. Our love thoughts & prayers are with all those affected.

We are devastated by last night's tragedy in Manchester. Music is about bringing people together. Our love goes out to everyone affected.

Sending love and prayers to all those directly affected by what happened last night in Manchester ????

Manchester Arena blast: 19 dead and about 50 hurt - this is so utterly heartbreaking. https://t.co/aYG6iaUd6b

Truly heartbreaking to think of young kids at their first pop concert experiencing this.