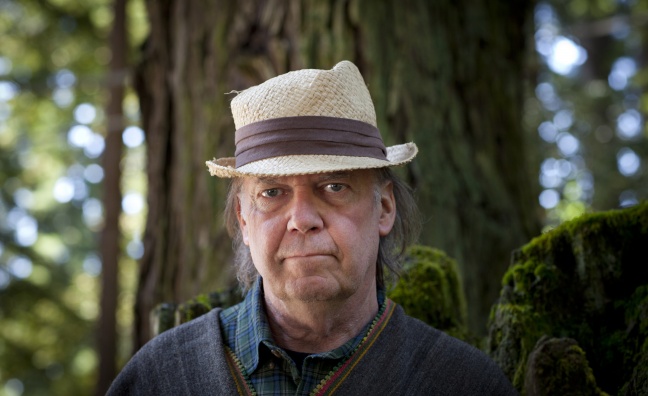 Neil Young and Bob Dylan's joint-headline concert at Hyde Park is to go ahead without Barclaycard as sponsor.

The show had been announced as part of AEG Presents' annual British Summer Time (BST) series before Young raised objections to the involvement of headline sponsor Barclaycard, which he branded a "fossil fuel funding entity".

"That doesn’t work for me," he said, in a post on his Neil Young Archives website. "I believe in science. I worry about the climate crisis and am deeply concerned about its massive global ramifications. There’s no doubt about it. It’s been a massive fuck up!”

Organisers said the gig will now take place as a "standalone concert", separate from BST. "Neil Young has made the decision to move away from the Barclaycard presents British Summer Time concert series," said a statement. "Neil Young and Bob Dylan will play a stand-alone concert in Hyde Park on the same date, July 12. All tickets will remain valid."

Young said promoters had jumped the gun in announcing the gig and putting tickets on sale last month.

“I had no idea the announcement was coming that day,” he said. “I was still finessing the art for the poster and trying to make sure that all of the details of the show were agreeable to me. Then, suddenly, someone jumped the gun. The tickets were put on sale and the announcement was made, all without my knowledge.”

In a separate post on Tuesday night, Young claimed victory, saying he was "happy to announce that the Hyde park show will proceed without Barclays as a sponsor".

Previously confirmed BST shows with Robbie Williams and Florence + The Machine will take place as planned.

"The Barclaycard presents British Summer Time concert series remains unaffected and will continue as normal with more headliners to be announced in early 2019," added organisers.