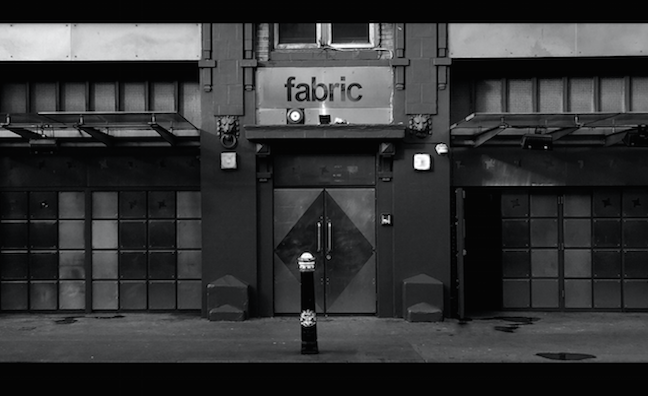 It’s been quite the few weeks for Fabric. Reading Muisc Week's Q&A with co-founder Cameron Leslie below will tell you that much.

On November 21, it was revealed that the club had won its bid to regain its licence and reopen, following Islington Council’s decision to close it in September after the drug-related deaths of two teenagers at the venue.

The news came a week before the club was due to begin fighting the decision at an appeal, against a backdrop of passionate support (its #saveourculture fund raised more than £325,000 and drew public backing from everyone from Pete Tong to MP Emily Thornberry) that contrasted with disappointment that it had been closed in the first place.

A fallen giant of UK nightlife, it had lost its right to party amidst a period of turbulence which has seen the closures of important venues including Plastic People, The Silver Bullet and Dance Tunnel, which didn’t even last four years.

Now, it’s fought to win it back and details of Fabric’s three-night reopening event have been announced. The mood feels celebratory, and there’s an obvious sense of relief and joy among the punters that love it and the artists, DJs, clubs and promoters that make up the scene it’s been such an important part of since it opened in 1999.

From the outside at least, it’s as if, in the space of less than two weeks, Fabric shifted from a closed club about to face what would likely be a strenuous appeal process, to a place reinvigorated by good news and gearing up for a three-night opening party.

On the negative side, the possible cost of the 32 licensing conditions drawn up as part of the reopening agreement remains to be seen. What will ID scanners, enhanced searching procedures, a new security company, physical changes to the club and covert surveillance do to Fabric’s atmosphere?

For now though, what’s important is that Fabric is back open. Or, as some are saying, culture has won.

Read on for Leslie’s thoughts on the weeks building up to Fabric getting the keys back.

What have been the most difficult moments of the last few months?

Having to let a number of faithful and loyal staff go was definitely the hardest moment, some had mortgages and families.

Fabric’s closure seemed to shift, or at least highlight a shift that was already happening, the perception of nightlife and clubbing in the UK. How did it feel to be at the centre of that?

We were such a big story that definitely brought the spotlight onto the industry, but you can’t discount the hard work that others have been putting in for years to instigate this shift. Alan Miller at the NTIA [Night Time Industries Association] has been integral in this with his work lobbying to bring in a Night Czar to London, and Sadiq Khan himself for putting nightlife on the agenda.

What state is the scene in now?

There are challenges that’s for sure, but what we’ve seen is a strengthening in our community of venue owners and promoters who really came together for this cause. People who were once our competitors became our allies, and so many people who loved music and clubbing came together behind us, so I see the scene as strong and united at this point.

How do you foresee it changing?

Describe the support you’ve had from the music industry

For starters we had incredible financial support from artists, booking agents, music lovers and venues, who contributed to our fund and also spoke out in support. Then we saw a group of the country’s leading promoters come together for the #saveourculture GSS events, so we have to thank The Warehouse Project, Chibuku, Circus, Eastern Electrics, Resident Advisor, The Blast, Sub Club and In:Motion for helping raise money to keep our operation going to get to this point.

Do you think the industry needs to change its approach to dealing with problems that can arise in nightclubs or venues? If so, how?

We’ve seen a lot of excellent professional practices elsewhere in the country that should be commended. Just take a look The Warehouse Project in Manchester who run an excellent operation, indeed a number of our supporters are exemplary in running professional enterprises.

What does Fabric winning the battle to reopen mean for the industry? What threats or dangers does it now face?

It’s definitely positive that we’re able to come back, not to forget the reforms we’ve been pushing for in regards to some of the licencing laws, which will offer all venues around the country better protection against closure. We’ve had our representation read in the House Of Lords and Philip Kolvin QC will progress this next year thanks to the generous contributions to the #saveourculture fund.

Will you change the club’s approach in any way?

There will be the changes that are set out in the 32 licencing conditions, and we will have a whole new approach as an ISO [International Organisation for Standardisation] approved operation. This will mean a more regulated approach behind the scenes, but it won’t affect the atmosphere on our dancefloors. Fabric disassociates itself from drugs and we want to encourage more personal responsibility.

How worried are you about something similar happening again?

There will always be that worry, but we are putting in new systems to make sure that we recognise the signs of anyone being unwell at the earliest point. Our staff are all undertaking training from drug harm reduction charity The Loop to notice these warning signs early, we will still have trained medics on site and have created a new post as head of welfare.