One Love Manchester: The magic moments 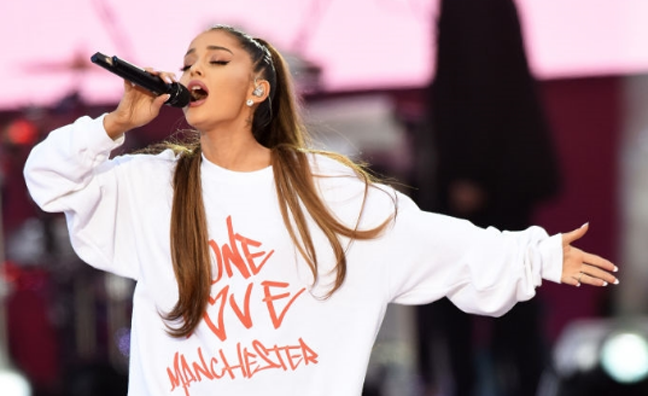 Manchester hosted one of the most remarkable concerts in a generation last night as Ariana Grande and a stellar supporting cast united in honour of victims and families affected by the Manchester attack.

Here, Music Week looks back at the stand-out moments from an unforgettable evening...

Holding a benefit show less than two weeks after a tragedy could have felt inappropriate. That it struck exactly the right tone speaks volumes of the organisers who assembled a star-studded bill in double-quick time, and the myriad of performers, none of who outstayed their welcome. But it was Grande who shone brightest of all – an incredibly gutsy, inspirational and talented global superstar.

Miley Cyrus celebrated her return to wholesomeness by singing solo, with Ariana and with Pharrell - performing all three tasks with distinction. Her duet with Grande on Crowded House’s Don’t Dream It’s Over was flat out adorable in fact; it’s good to have her back.

The sight of Justin Bieber, accompanied by just an acoustic guitar, invited flashbacks to his early YouTube videos when he first caught the eye of the driving force behind last night’s show, his manager Scooter Braun. Bieber addressed the crowd with sincerity while his short, stripped-down set provided a welcome change of pace on an otherwise frenetic show.

Chris Martin and co could have easily felt out of place on the pop-heavy bill, but once again proved they are a band for any occasion. Which brings us to…

Don’t Look Back In Anger

There’s a certain irony in Noel Gallagher penning a song, essentially about nothing, that then goes on to mean everything - a phenomenon perfectly encapsulated by this Britpop classic. It was Coldplay’s turn to follow Courteeners in covering the mid-90s standard, now adopted as a Mancunian national anthem in the wake of recent events. Almost like Manchester’s answer to You’ll Never Walk Alone you might suggest, if you weren’t right next door to Old Trafford...

OK, so a charity gig probably wasn’t the time or place to be dropping in his new single (however banging it may be), but you can forgive such indulgence when he belts out two of the greatest rock songs ever written (Rock ‘N’ Roll Star & Live Forever) either side of it. The voice is sounding in rude health too – somewhere along the line, the younger Gallagher has regained his mojo.

Talk of Liam and Noel reuniting on stage in the name of Manchester always seemed fanciful, but intensified as the show drew near, before ultimately failing to materialise. Would an Oasis reunion have made it all about them and detracted from the true meaning of the night? Or would it have provided a monumental moment to help soothe a city in mourning and enrich an already huge occasion? We’ll never know for sure but, needless to say, Coldplay were the worthiest of stand-ins on Live Forever.

No Take That reunion either

Donning a Justin Bieber Purpose Tour, changing the lyrics to Strong to “Manchester, we’re strong!” and leading an emotional sing-along of Angels, Robbie Williams’ made the most of his brief time in the spotlight. The only complaint was that he didn’t reunite with his on-off bandmates Take That, who preceded him on stage.

One of the enduring images of the day was the sight of a policeman skipping with music fans during the show, while Music Week captured another special impromptu moment during Coldplay’s Fix You. It was truly an event that brought out the best in people.

One Love Manchester was everything it was intended to be and more – a poignant day of reflection but also a reminder of the joy that music can give to people. In troubling times, this was a night to be cherished more than ever.