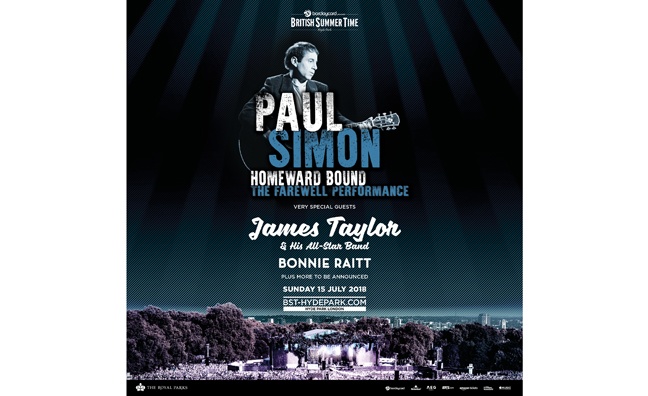 Jim King, SVP, AEG Presents, said “There is no finer way to close Barclaycard presents British Summer Time Hyde Park 2018 than watching Paul Simon take London on a musical odyssey through one of the most remarkable song books in history.

"Paul, James and Bonnie all together on the Great Oak Stage has to be the show of the summer and a truly unmissable event.”

Alun Mainwaring, head of events, filming and commercial development at The Royal Parks, said: “We are extremely proud and honoured that another huge artist has chosen Hyde Park. This year’s Barclaycard presents British Summer Time Hyde Park promises to be another unforgettable and successful year with The Cure and Eric Clapton already sold out.

First held in 2013, the AEG Presents-organised concert series has gone on to star acts such as The Rolling Stones, Taylor Swift, Black Sabbath, Tom Petty and Phil Collins.