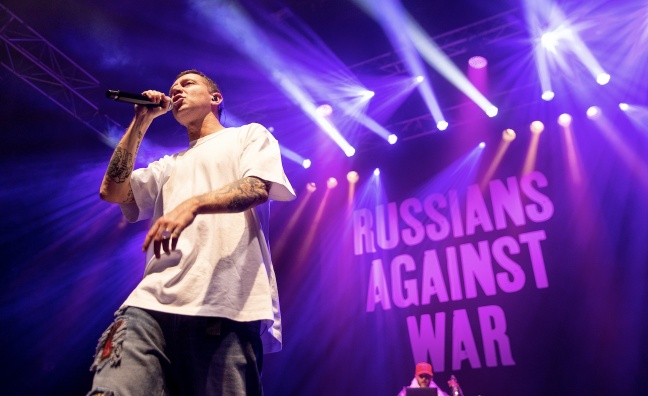 The gig took place at O2 Shepherds Bush Empire in London last week, raising more than £50,000, which was donated to efforts to support Ukrainian refugees impacted by the Russian invasion of their country. Oxxxymiron recently cancelled six sold-out shows in Moscow in protest against the war.

In order to maximise the impact of the London show, organisers livestreamed the concert via Twitch, YouTube and Instagram. It was Oxxxymiron’s first London show in six years and was the second in a series of gigs for RAW. Russian rock musician Boris Grebenshikov also appeared at the event.

Mike Malak, Oxxymiron’s agent, said: “It was vital to both myself and Ponnu [James Ponnusamy] to put this show on and unify people against war and allow an incredible artist to use his platform. It is times like these that remind me why I and many of us got into music and the power it holds. To see so many people of different ages and backgrounds come together and raise an incredible amount of money for an important cause makes it all worth it. Combining the live experience with livestreaming meant we could not only raise money but also awareness that this is a war nobody wants to see nor supports.”

James Ponnusamy, the show’s promoter, added: “Nights like last Thursday are an incredible reminder of the strength of music and how it brings people together for the greater good. Thank you to ticket holders and the Livestream audience who helped raise awareness and show their generosity and support. All donations received will help those in Ukraine impacted by the War.”