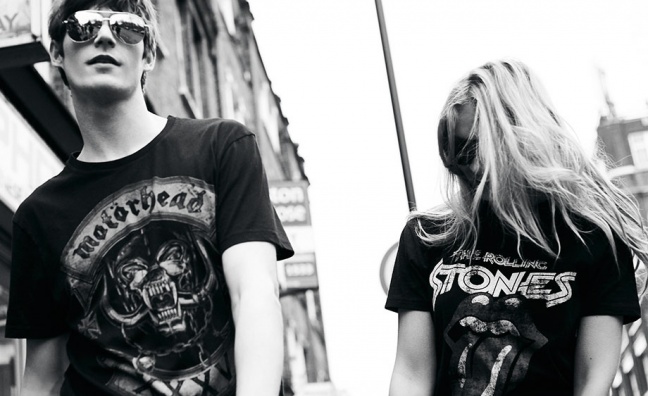 What do Justin Bieber, Miley Cyrus, Lindsay Lohan, David Beckham, Kanye West, Kim Kardashian, Rihanna and various people off of The Only Way Is Essex have in common?

Well, they’re all famous, obviously. But they’ve also all been snapped wearing old school heavy metal T-shirts, despite not having any obvious love for, or credibility within, the genre. And, on a less high-profile level, parents of teenage girls are now used to them returning from Primark, Zara or other fashion outlets sporting T-shirts featuring bands the purchaser has never actually heard of.

It’s been a fashion trend at least since the likes of Robbie Williams and Geri Halliwell first tried to break out of their none-more-pop images by donning rock band T-shirts in the late-‘90s. But why is it happening?

“Alternative culture has always been seen as rebellious and cool,” says fashion and beauty journalist (and rock fan) Anita Bhagwandas. “That's really marketable as a trend to people in the mainstream. Everyone wants to be seen as a bit cool - so a Metallica T-shirt marks you out as edgy, in theory.”

That seems to outweigh the online flack celebs receive when, say, Kanye wears a Cradle Of Filth T. But what’s in it for the bands?

“I'd say it's bad for the bands,” says Bhagwandas. “Your real fans will think you've sold out because you've signed off on your merch being sold to people who aren't into your music.”

But, in a world where even real fans are more likely to spend money on T-shirts rather than actual music, the High Street trend does at least open up a potential new revenue stream for struggling rock bands.

“It opens up licensing possibilities for intellectual property so the bands do make money,” says veteran metal executive Julie Weir, now head of Music For Nations, whose classic roster includes many of the acts now seen on celebrity torsos. “With the rise of streaming and less revenue coming back in, bands have got to get investment somehow and there are some very clever licensing deals done.”

Iron Maiden are one of the acts doing those deals – and their T-shirts have been spotted on so many celebs there are entire Buzzfeed articles dedicated to the phenomenon. Barry Drinkwater, group executive chairman of Maiden’s merch company Global Merchandising Services says they resisted the call of the malls for years, but bands’ hands have been forced by the collapse of music retail and the surfeit of bootleg material.

“We don’t want [merch] being slopped out for $9 because it damages the brand value,” says Drinkwater. “We steadfastly refused to make them bargain basement, mass market items for people who aren’t Maiden fans.”

Instead, Global has targeted classy partnerships with the likes of H&M and Supreme and Diamond Supply Co. skatewear brands.

“By doing that, hopefully we’ll get all these kids going, I’ve never really heard Maiden, but you know what, this is a cool shirt, I’m going to listen to them,” says Drinkwater. “Let’s do something to turn people on to who Maiden are.”

So, ultimately, does it matter if the people wearing the shirts really don’t know who Maiden (or Metallica, or Slayer) are?

“People going out and buying a Judas Priest T-shirt just because they've seen David Beckham wear one is quite strange, but if the money's going back to the band, I can't really argue with it with my business head on,” sighs Julie Weir. “But with my old curmudgeon head on it's like, You absolute dickheads.”