Six Questions With... Dan Hill of Above Board 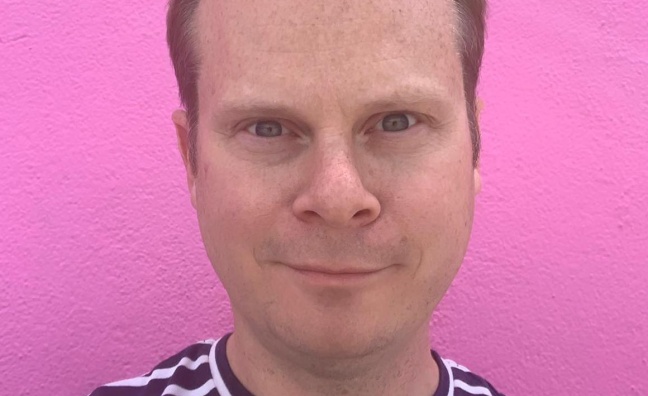 Welcome to the latest edition of Six Questions With..., a regular short and sharp interview with a music figure. Email james.hanley@futurenet.com if you would like to take part or recommend someone for inclusion.

This week's Q&A is with Dan Hill, director of London-based electronic music distribution and label services company Above Board, which recently released the Fabio & Grooverider Presents 30 Years Of Rage compilation album.

I started buying records seriously in my early teenage years with whatever money I could get from my paper round. First of all, I was an indie kid as my mum was running a local Britpop night at Moles club in Bath. She used to get me, aged 14, to DJ between the bands such as Supergrass, Oasis etc before they got big. I was cheap labour I guess but my mother helped me get onto the DJ promo lists at the time such as White Noise, Wax Works and Pop mailing lists, which then helped open me up too the big beat/breakbeat/drum and bass scenes of the mid '90s. White Noise advertised a job as an intern around 1997 to do help with the club promotion DJ mailouts for labels such as Mo Wax, Wall Of Sound and Skint, so this was my first full time employment. White Noise was set up by Chris Butler and was managed by James Pitt, who now runs Your Army, and Jamie Cruisey, who coincidentally now works for me at Above Board. Back in those days a record label would give you 500 promotional 12” just to send out to UK DJs.

I have been running the distribution company Above Board for around 12 years, originally we were focused purely on physical formats working with labels such as DFA, Italians Do it Better, ESP Institute etc before we branched out into all formats and now we’re working with artists such as Peggy Gou, Bicep, Erol Alkan, Derrick May, Louie Vega, Dimitri From Paris, Radio Slave, Charlotte de Witte, DJ Harvey and Mall Grab. We also do a lot of licensing of major label reissue projects including Sony, BMG, Demon, Universal and Warner

I guess the people you meet along the way - sure there’s some people in this industry who are insanely difficult but they are few and far between. Most people work in music because its their passion. I’ve never not been involved in music and it’s the only industry I’ve ever worked worked in. I’m currently writing up this interview from my hotel room in Los Angeles, so I guess the “work trips” you get to go on are also a nice bonus.

When I first started out working in this industry, it was the mid '90s and record labels had money to spend on developing artists and could take risks. You did not have to be a record producer as well as a touring DJ/artist to make ends meet. You could make money from being simply producing music all week and not have to get up on stage every weekend too. Since the early '00s there was a massive decline in revenue year on year and more and more professionalism was been squeezed out of the industry. Now, with the streaming revenue growing seemingly month on month for record labels and artists I hope we can get back to the days when a studio prodigy doesn’t have to all be an 'entertainer'. Some producers are best in the studio week in week out learning their trade and some are made to be on stage performing.

I guess helping artists and labels grow from humble beginnings to become recognisded on a global scale. Watching the first Daniel Avery LP blow up on Erol Alkan’s Phantasy Sound was great to be a part of as well, as working with Jamie Jones’ Hot Creations since its inception, to go on and become one of the leading labels in electronic music that constantly keeps breaking new artists year on year. Also helping run Classic Records alongside Derrick Carter, Luke Solomon and Leon Oakey in the late ’90s/early ’00s certainly helped me learn the ropes of the industry!

What's the best event you’ve ever been to?

Our summer holidays as children weren’t trips to Mallorca or Spain, my brother and I were taken to every British music festival in the ’90s. I got to see bands such as Nirvana at Reading ’92, Orbital at Glastonbury ’94 and too many seminal Chemical Brothers DJ sets or live shows at Glastonbury to mention. So rather than any one specific event, it was just going to these festivals and discovering bands I’d never heard of or seeing truly memorable life-changing  performances.