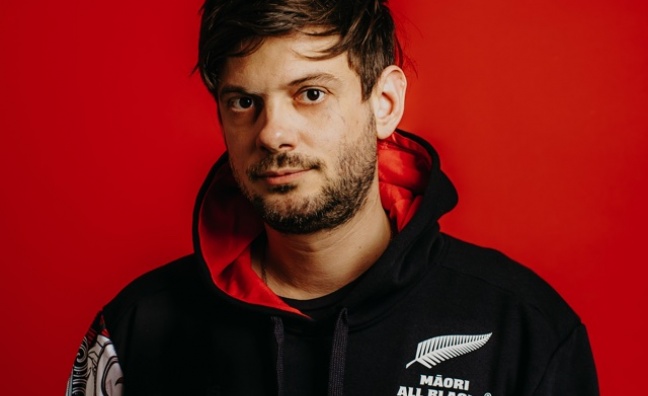 Welcome to the latest edition of Six Questions With..., a regular short and sharp interview with a live music figure. Email james.hanley@futurenet.com if you would like to take part or recommend someone for inclusion.

This week's Q&A is with US-based DJ/producer Sacha Robotti, who launched his label Slothacid earlier this year with a four-track EP of original productions, Welcome To Slothacid, and is currently in the midst of a North American tour.

If you consider this a job at all, I guess my first job in music was me playing the cello as part of an amateur chamber orchestra when I was 11 or so, in about 1991. I did this for a few years, it was valuable experience in terms of playing together with other musicians, getting to know the different instrumental voices, listening to a conductor, learning about classical orchestral arrangements and traveling to concerts among other things. This also gave me the opportunity to perform solo on my cello with an orchestra too! I got my first taste of limelight there.

Another very valuable experience for me was working in a recording studio in Eastern Germany, in around 2001. I was doing all kinds of tasks from learning Cubase, cutting audio, archiving samples, to editing music, programming websites and making coffee haha. I didn’t make any money from this job either, but I was paid in audio samples, which then proceeded to be the foundation for my own sample library.

On a “professional” level, I would say since 2005-2006. This is when I was based in Berlin and decided to pursue music full-time. I studied architecture until then, even graduated in it, but realised that I wasn’t as passionate for architecture as I was for music. Within that job description of DJ/producer, I took on many different roles: be it of a DJ, live performer, producer, songwriter, mixing engineer, label head, booker, social media guy, web programmer, designer of records, pod cast host, etc. Some of these roles weren’t well defined at times, and it was all DIY.

To sum up how these roles may have changed over time, I’d say that since I started out, the musical landscape shifted massively to the digital realm. I experienced this shift with Robosonic, the DJ team I was part of from about 2005 until 2017. We started out playing and pressing our own vinyl as a label and to put ourselves on the map as an act, and we mainly used Myspace and our homepage to promote ourselves on the web. Gradually the CDJ1000 and Ableton Live performances were popularised in clubs, and you could also DJ on software like Final Scratch/Traktor, Serato etc., which are still great tools to play digital music via a vinyl setup, or with controllers. This led to more and more DJs having the incentive to download music to burn on CDs, and to more DJs in general, because the hurdles to become a DJ got lowered and less expensive through new technological applications. We saw increasingly DJs/producers self-release their music without a label, we witnessed distributors and vinyl only labels going bust too. The scene had to adapt more or less chaotically to the advent of .MP3 and .Wav, there were limited resources to buy high quality digital music as a DJ, record stores were closing one after the next, and social media platforms were catching on to incorporate music into their business. Spotify or streaming platforms for consumers weren’t a big thing yet, Soundcloud and Mixcloud had become platforms that you wanted to be on to have your music heard as a DJ/producer, Facebook became the site for band pages and event pages. Pioneer released CDJs with USB ports, which made the CD format obsolete in the club world, and many manufacturers of electronic music equipment started putting products out that were directed to a new prosumer market.

Long story very short, what I’m trying to express is how the roles and jobs “in music” have changed quickly over the years - not even the last 10-20 years, but ever since there was such a thing as a “music industry”. All along we had to adapt to new technologies and explore new ways of producing, releasing, distributing, promoting, and performing music.

I live and love what I do with a passion, and 24/7. There’s rarely an escape! Regarding the “live” aspect... when I perform as a DJ, I’m playing my own records but also other people’s music - I’m not creating any piece of music live, even if I use live effects. What I love about DJing, is that I have the control over the sound system, which feels visceral and kind of primal. I also love that I can put my spin on the music that I play, I can edit and remix music however I want, creating things that only I have and play. To me, DJing is personal and from the heart! I put myself into a flow state to create a journey for my crowd to be on, so they can lose their sense of time, switch off their brains, and immerse themselves in music as some form of escapism or therapy. The live part of this is that energetically I’m feeding off the crowd in real time, as the crowd feeds off me. It’s an inclusive experience, ideally.

What is the one thing you would like to change about the live business?

One of the highlights of my career was playing Coachella Do Lab on my birthday in 2016 and everyone sang Happy Birthday. Still getting goosebumps.

One of the best things I’ve ever been to was probably Torhout-Werchter Festival in 1996... Rage Against The Machine, Radiohead, Moloko, Bjork, Red Hot Chili Peppers, Neil Young, The Prodigy, Underworld, House Of Pain, Sepultura... I was 16 at that time, we rode our bicycles there.