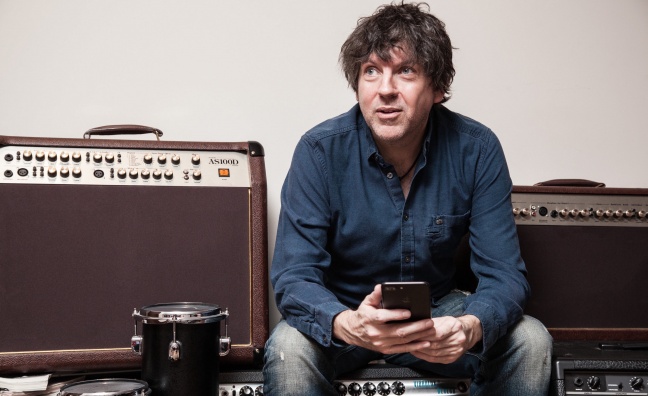 This week's Q&A is with Kevin Brown, CEO of direct to fan app GigRev.

I ran a business organising fan club trip to gigs around Europe, in cities like Paris or Amsterdam. That was back in my 20s and it was fantastic fun but of course I never made any money. I did however make a lot of people happy and there’s nothing better than seeing lots of happy faces after a gig. We’d work with fan clubs and record stores to sell our packages on a commission basis, then one day I spoke to Madonna’s fan club and they told me that they had just printed their last edition and that the label would be running a website instead.

I remember contacting the label and being told I’d have to pay a large fee to advertise on the site, and after a long chat decided that I’d be better off contacting Madonna’s fan sites and getting them to advertise a Paris gig on a commission basis. At this point we’d already built a website to sell these packages so we just needed them to put a banner on their site which would click through to our site and we’d track the clicks. I remember sending a cheque for £30,000 to one of Madonna’s fan site and getting a call from the girl that ran the site asking why we’d sent her £30,000. She was completely oblivious to the fact she’d referred so much traffic to our site and that the cheque was the commission she’d earned. She was a student, so I think that made her year. Eventually, this led on to me starting an affiliate network, AffiliateWindow (now called Awin.com), then running an artist management firm, and now my current venture GigRev.

I set up GigRev three years ago after years of managing The Australian Pink Floyd and The South (Ex Beautiful South) and realised fan clubs were pretty much dead and been replaced by websites. So, I decided to create a white-label app platform that lets artists, and social influencers, start earning money from their superfans. After years of development work, we launched GigRev late last year. It’s working now and generating revenue for all of the artists we have on board.

We know that superfans want to support their favourite artists, but they have a limited opportunity to do so these days - the direct artist to fan relationship is so important but most people think of it as selling merch and tickets, however, it’s so much wider than that. With GigRev powered apps it’s all about owning the relationship with the fan directly and also building two-way communication that reaches all fans. Social networks like Facebook and Instagram both own the fan relationship and both charge to reach all fans. In essence, they’re ad networks; the customer is the advertiser and the user is the product they sell.

They’re giving away their content - music, videos, photos - for free on social media and pulling in huge crowds for these platforms but yet, they get very little return. They’ve lost the intimacy of really connecting with fans the way they once did through fan clubs, where fans got the exclusives. This is so important to build community. If everything is available everywhere then what’s it worth? I’m not saying don’t use social networks, in fact, use them as much as possible, but think of them as the top of the funnel to pull people into an artist app, whether that be on mobile or desktop.

It’s always changing fast and there’s always a challenge ahead, and I thrive on that. I have such a passion for music and the artists that create it. I love the fact music can bring out so much emotion and the reaction from fans. When I managed the Aussie Floyd, we worked on growing the show with visuals and lights. It was great to work with Neil Warnock and Steve Homer to get them to the O2 Arena and get the show just right - from the lights to the video to the lasers. I will always remember how hitting the photo of Rick Wright at exactly the right millisecond during Wish You Were Here brought the audience to tears. It did that to me every night out of pride and respect.

Artists being able to make money! I read recently that 10% of songs on Spotify get 99% of the plays. So, what about the other 90%? Ok, it's not new that a fraction of the artists out there make the majority of the money, but streaming has made that fraction even smaller. I think too many artists in the industry focus on streaming when their kind of music just won’t work there. Look at the rock sector, for example, streaming is often tiny in comparison to downloads and physical purchases. It doesn’t make it less relevant, but sometimes it feels that way when the press focuses on what Spotify numbers say. I think we need to get out of measuring the success of an artist simply by the streaming numbers.

We’re giving artists a way to create a private labelled “Facebook” if you like at GigRev which has all of the features an artist needs, where they can own the fan relationship, data and offer paid subscription models to access premium content. It’s already generating thousands of pounds for artists from their fans. These are fans that want to support the artist and are happy to pay a subscription for premium content, for example, live streams, live recordings and unreleased music that isn’t available on Spotify. To generate £1,500 in revenue, an artist using GigRev would only need to have around 300 fans subscribing to their app. To generate that revenue through streaming for most artists could be as many as a million plays. Obviously, a lot less for self-releasing artists but you can see how the maths work out.

That's a tough one. I started out running bus trips, but my tech background has served me well over the years. I’ve tried to keep it varied but I keep getting pulled back to music somehow. Not many people know this, but I was involved with The Stone Roses’ Spike Island gig. I was working with the promoter, a guy called Matthew Cummings, at the time in a tiny little office in Sale, Cheshire. I remember sitting in an office with three other people all night crossing out the ticket price and writing the new prices on them before it went on sale as it was such a hot gig. I found a few pictures online the other day actually and it brought back great memories as that was perhaps one the most chaotic few weeks of my life. I spent most of the gig under the stage trying to find a way to block people from getting through to backstage. It was chaos but looking back, great fun.

That’s a hard one - too many amazing gigs to choose from! I think one of the best gigs I’ve ever been to was U2’s ZooTV tour in Europe. My first ever gig was definitely one to remember it was at Cardiff Arms Park on the Joshua Tree tour, so maybe I’m a bit bias. I once went to a Phil Collins gig in Paris and fell asleep standing up, but I think that was down to the long bus trip though. I’ve also seen The Pearl Harts a few times this year - they've toured with Skunk Anansie, Garbage and are supporting The Kills soon, and they are going places.