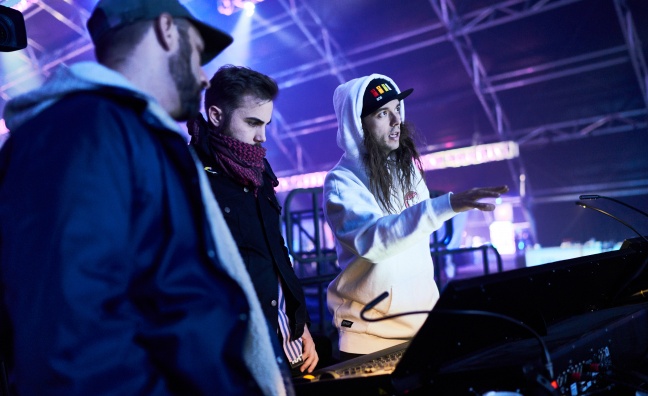 This week's Q&A is with Miguel Risueño, aka Mike808, creative director and lead stage designer for LA-based creative studio Production Club. Over the past five years, Risueño has been the creative and technical guru behind shows including The Chainsmokers' Memories Do Not Open tour, Skrillex's Mothership tour, and Zhu's Dune tour.

I think the very first one was as a DJ on a block party in my barrio at 16 or so. I’d just play beats for those who didn’t have a DJ. A couple years before I had started producing with Fruity Loops 1.0 because everyone wanted to be an MC but nobody wanted to be a DJ. After that I somehow landed the weirdest music jobs, like composing music for a nuclear reactor or recording songs for the Girl Scouts annual contest. I also ended up designing the stage for my own DJ show, which was the beginning of me designing shows for other artists.

How long have you been in your current role?
My role has been shifting so much but in very little increments that I’m not so sure. It might be 15 years or 15 minutes depending how I look at it. As a creative director and production designer for big music acts it has been probably something like six years, dang, seven years actually. If we count less known acts or totally unknown acts like myself (lol) then is more like 15 years.

What is your favorite thing about working in the live music industry?

Damn, there’s a bunch of favorite things, but if I need to select one I’d say my favorite one is probably that I get to work directly with artists during their creative process. Each artist has a very particular way of approaching work and is refreshing every time because they all think out of the box. There’s no “preset” on that process, sometimes someone calls you at 4am to go grab a burger and sometimes the meeting happens on a studio in the desert with a bunch of other musicians. I think that not knowing how tomorrow is going to unfold is what keeps me going.

What is the one thing you would like to change about the business?
Just to pick one I will say I feel there is not enough diversity in EDM nowadays, and I would like for that to change. It’s like somehow we are forgetting about the multicultural origin of club culture and becoming indifferent to any issue that is a bit more complex than the average: for example ticket prices being only affordable for a few, the same lineup repeating across festivals or minimal support to groups that lack means. I understand the name – music business – is already paradoxical because it puts together art (music) and money (business), but there are still things we can do to create a more fair balance that will also benefit the overall industry in the long run.

What is the highlight of your career so far?

The fact that I came to the States with nothing and now I am surrounded by an amazing team of incredibly talented people, in my own company, doing what I love. It’s crazy. Another what-the-hell highlight is that after 15 years in the industry I still don’t feel I have worked one day in my life. My work still doesn’t feel like work. I know it sounds like the emptiest cliche but I pretty much do what I want when I want with who I want, it’s nice.

What's the best gig you've ever been to?

If we are talking about gigs I’m a part of I’d say that every show feels like the best one once the intro reaches its climax. You get to experience the peak tension of months of work that then clears up suddenly to let the show begin. It’s a great feeling. As an audience member the most brutal gig I can remember was Iron Maiden when I was around 11 years old. Listening metal for the first time was already very shocking, but seeing a giant Eddie getting electrocuted in an electric chair blown me away. That moment is still burnt in my retina today and inspires me to create epic show moments for the artists I work with.