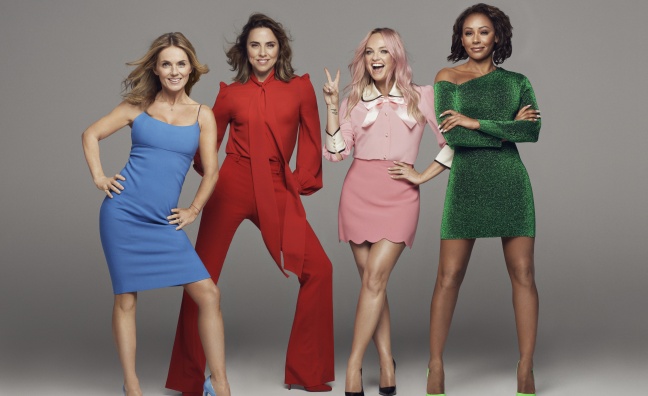 Four additional dates – two apiece at London's Wembley Stadium (June 13, 14) and Manchester Etihad Stadium (May 29, 31) – were added due to demand after tickets went on sale on Saturday morning. A second show at Coventry's Ricoh Arena has also since been added.

Booked by UTA, the group's first tour in a decade is being promoted by SJM Concerts, Live Nation and Solo.

“Demand for Spice Girls was off the chart," said Ticketmaster MD Andrew Parsons. "They have smashed through Ticketmaster UK’s records becoming the busiest ever sale. There were millions of people on our site searching for tickets, with a queue at one point of well over 700,000.

"Hundreds of thousands of tickets were sold to happy fans across the country within minutes. Congratulations to the girls. From what we saw, they could have played nearly every night for a year.”

The management of the Spice Girls is being handled by Modest! Management and XIX Entertainment, while fan-to-fan ticket exchange Twickets is the official resale partner. Modest co-founders Harry Magee and Richard Griffiths have previously invested in Twickets.

'We're delighted that Spice Girls have chosen to partner with Twickets for their 2019 shows, and it's great to have been involved from the early planning stages of the tour," Twickets founder Richard Davies told Music Week. "The key has been making life simple for the fan, so no matter where they bought their primary ticket and whatever the show, Twickets is the one marketplace where they can trade safely, securely and always at face value."

The Spice Girls last performed together at the closing ceremony of the London 2012 Olympics and last toured in 2008.

See the new issue of Music Week for an exclusive interview with the team behind next year's reunion.