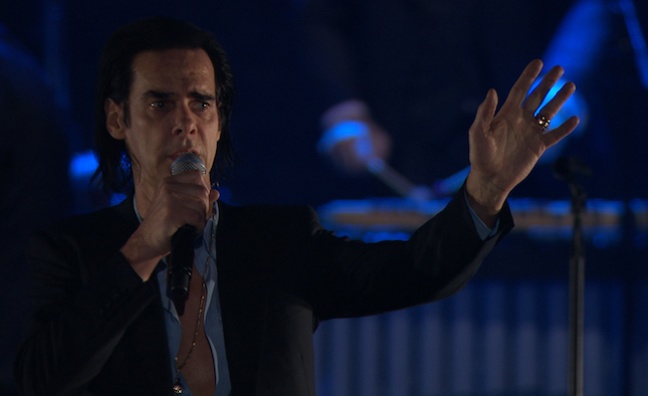 Nick Cave & The Bad Seeds launch their concert film in cinemas today (April 12) for one night only. Distant Sky captures a Copenhagen show from the acclaimed and emotionally charged 2017 tour, featuring songs from Skeleton Tree. Here, Music Week catches up with Marc Allenby, CEO of distributor Trafalgar Releasing, to find out his hopes for the film today and to discuss the cinematic presence of Nick Cave...

What are your expectations for this release?

We have deliberately contained the film’s release, creating scarcity and driving demand, ultimately to ensure that the fan experience is premium. We expect to gross in excess of £1 million with a very strong screen average

How wide is the release and in what territories?

We’re in around 650 cinemas across 45 countries, including most of Europe, North and South America and Australia. We’ve built a successful business tailoring releases to our content partners needs; other music events have screened in closer to 3,000 cinemas across 80 countries. There are unique considerations and challenges to each release but we’re pretty confident of our model and reputation, and as such our exhibition partners tend to embrace the projects we take to them.

Nick Cave has released other films – including the documentaries 20,000 Days On Earth and One More Time With Feeling - why does he have such appeal on the screen?

Nick Cave is an incredible artist and has fanatical fans that engage with his work on multiple levels. He is a multi-disciplinary artist spanning music, film and literature, and as such the big screen feels a very natural place to celebrate him. The three cinematic projects are distinctly different and complement each other perfectly.

From a creative perspective there needs to be a ‘performance’ at the heart of any concert film. From a practical perspective, we need artist and management engagement on the project.

How closely were Nick Cave and his team involved in the cinema project?

We have worked with Nick’s management team at ATC very closely on this release and their previous two films, 20,000 Days On Earth and One More Time With Feeling. We got involved at concept stage and worked with them to shape the strategy and nature of release. I like to think a trust and understanding has developed between the two companies allowing an agility and fluidity to our work.

Do these kind of releases have a wider impact on an artist in terms of album sales/streams and tickets sales?

Absolutely, One More Time With Feeling was released the day before the Skeleton Tree was released. The film was a commercial success and Skeleton Tree the most successful Nick Cave album to date [internationally]. This doesn’t happen by chance, though, we carefully worked on a twin campaign for both film and album with management and label to ensure both releases had the maximum impact. We recently released David Gilmour Live at Pompeii, which again was a hugely successful concert film release and DVD sales vastly exceeded expectations too. When delivered correctly, all aspects of a campaign complement each other and ultimately give fans multiple ways to engage with the artist.

Are there any other music projects you have planned?

We have some great, high-profile projects secured and in development for 2018 and 2019, and really expect to see significant growth in this area. We have recently established a Trafalgar Releasing office in the US to help realise the potential of this category.