The Chainsmokers on working with Coldplay: 'It was a dream come true' 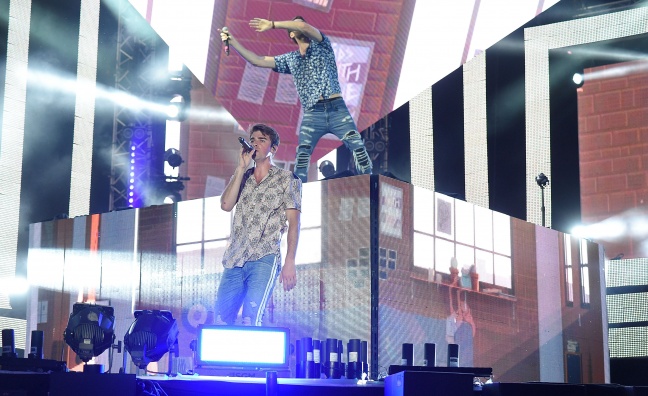 The Chainsmokers have told Music Week their collaboration with Coldplay on their hit single Something Like This was "a dream come true".

Debuted at this year's BRIT Awards, the track peaked at No.2 on the UK singles chart and has sold 759,594 copies to date, according to the Official Charts Company.

"That was a dream come true, I still can't believe we had the opportunity to do that," the electronic music duo's Drew Taggart told Music Week. "The whole experience from start to finish has taught us so much about what it's like to be a band like Coldplay.

"They're just epic. They dropped a lot of knowledge on us and taught us about the responsibility that you have as an artist and to yourself, so we're very grateful for that."

The duo were speaking ahead of their headline performance at Europe's biggest free music festival, Isle Of MTV Malta, and revealed their hopes of playing Glastonbury in future. "We would love to play that festival, but it's also about being prepared for that type of event," said Taggart.

"We were traditional DJs up until six months ago, more or less, and now we kind of perform as a band. I think that's something that will lend itself much more nicely to a Glastonbury setting."

Asked about potential link-ups with other acts, bandmate Alex Pall said: "Stromae's last album was a huge inspiration to us when we were making our album, with the things that he talks about in his songs and the way that he produces his songs and we've been fortunate to come in touch with him. Hopefully we'll work with him at some point - I think we both want to work together."

The band's debut LP, Memories - Do Not Open, charted at No.3 in the UK upon its release in April and has shifted 56,808 units. "We'd been putting singles out for a long time and it was a really successful strategy, but we felt like we had more to say," said Taggart. "We make a lot of music and we had a tour coming up and it just felt like our time as artists to take that next step.

"We're really proud of the album and it's been amazing to see people's reactions to it when we perform. It taught us a lot about what we want to do in the future as well, so it's been a great learning experience all round."

He added: "I think the album won't necessarily die but one thing that everyone is learning is that writing music and sitting on it for two years isn't the right way - people don't want that. If you're an artist now, it's important to keep having music come out, not just to stay on the top of everyone's minds, but it's also good for you as an artist, creatively.

"Being able to put something else out that you've made recently that really reflects who you are as an artist in this exact moment of time is something really cool."