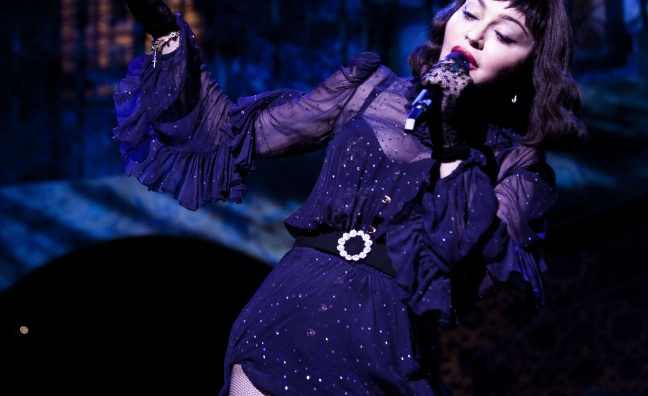 Madonna’s London Palladium residency finally got under way last night with a quote from writer James Baldwin: “Artists are here to disturb the peace”. And the ensuing show was certainly a riot, romping through a dizzying array of genres, set pieces and themes.

We’ve come to expect that from Madonna, of course, but the difference with the Madame X tour is the unusual intimacy of the surroundings. The Palladium – where Madonna is in residency until February 16 – is the smallest London venue she has played since her 1983 debut at Camden Palace (now Koko) and, if recent tours have relied on production to reduce the distance between her and her fans, tonight they are close enough to share their seats, even their drinks with her (but not to take her photo, as all phones were banned).

Madonna professes herself thrilled “to be able to see all your faces” and the feeling seems mutual; when she makes a couple of brief forays into the aisles, the reaction at being so close to a pop icon verges on the hysterical.

And if, at times, this intimacy seems too prosaic for a star of her wattage, at least her performance levels remain superhuman. The pre-show industry quips in the bar centred on Madonna “passing a late fitness test” to make tonight’s show, after her scheduled London debut on Monday was cancelled due to injury. But, despite her complaining of a dodgy hip and knee and occasionally demanding a seat, there’s no sign of a more sedate approach; surrounded by superb young dancers, she holds her own.

The elaborate set, extensive genre-hopping and spectacular set pieces make this the most ambitious, theatrical show since Kate Bush’s Before The Dawn. As with that show, some elements connect better than others but, from the opening God Control to the set-closing, joyous Like A Prayer, via the irrepressible pizzazz of Vogue, the star who essentially invented the modern stadium pop extravaganza set about proving that reduced scale does not need to mean reduced spectacle.

Yet some of the show’s greatest moments are its simplest: her stirring rendition of Frozen as her daughter Lourdes dances on the video screen; a lithe strum through American Life; the uncomplicated funk of Crazy.

The show is light on hits and heavy on latest album Madame X; meaning the gap between the fans’ fantasy Madonna setlist and the real life one remains wide. But that’s not really the point.

Instead, this is a show that’s equal parts brilliant, bewildering, belligerent and plain bonkers, but always Madonna. Mission accomplished.