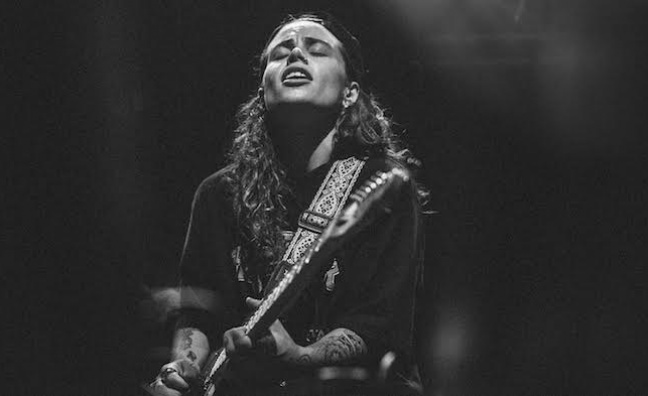 Both Jorja Smith and Tom Grennan booked major shows at O2 Academy Brixton before releasing a debut album. But Australian multi-instrumentalist Tash Sultana appears to have come out of nowhere to sell out three nights at the 5,000-capacity venue (September 20-22) before she even released an album.

When debut LP Flow State was released earlier this month, it charted at a modest No.67 and its sales would barely fill the upstairs seats at Brixton. But its momentum seems likely to pick up with Sultana’s live business booming around the world. Here, George Akins, MD of promoter DHP Family, takes Music Week inside her one-woman show...

How has Tash Sultana become such a live phenomenon - has anyone else sold out three O2 Academy Brixton dates before a debut album?

"Tash’s shows are just something different. We all know Ed Sheeran can pull it off on his own, but the difference with Tash is the number of instruments she plays on stage. Even Tash’s first London show (250-capacity Birthdays in Dalston) was over 90 minutes long, as she builds the songs playing loops over loops and then feeds off the audience getting into it.

"As for selling out three Brixtons, I spoke with the venue manager at Brixton to see if anyone else had sold three nights out without an album release. He said it’s rare anyone even does two on a second album let alone three before a first album. Obviously, the album is out in time for the shows, but we were already sold out."

Is that album helping her reach a wider audience?

"The album is just out and I presume will react much like live has, by word of mouth and sharing. At the live shows, there are more women than men and I would say you have a vast mix of demographics. With the way she has grown, it’s not in a specific scene so that makes sense - albeit I haven’t seen that happen before."

Do you know where the UK stands in her global appeal - is she big in other markets?

"She’s big everywhere, all across Europe she’s selling out similar sized venues to Brixton on multiple nights and the same in the States. On this run: Terminal 5 in NYC, AFAS Live in Amsterdam, Palladium in Cologne. In her native Australia, it’s even in arenas."

What are the opportunities for Tash in the live space as she prepares for her biggest European show to date next June at Alexandra Palace?

"Ally Pally will sell out and I hope there’s more to come. She’s breaking all the rules, so how big can she get is really a hard question to answer. She’s already bigger than you would imagine someone at this stage of their career could be. The sky’s the limit."

How much touring will she be doing for this album and have you got big plans for her?

"You already know about the Ally Pally show and she’ll be doing similar around the world in 2019 - Ziggo Dome in Amsterdam, Sports Paleis in Antwerp, Zitadelle in Berlin. I’d love her to just camp out in the UK but that’s just being selfish."