'The UK feels like a second home': The Killers talk returning to the stage 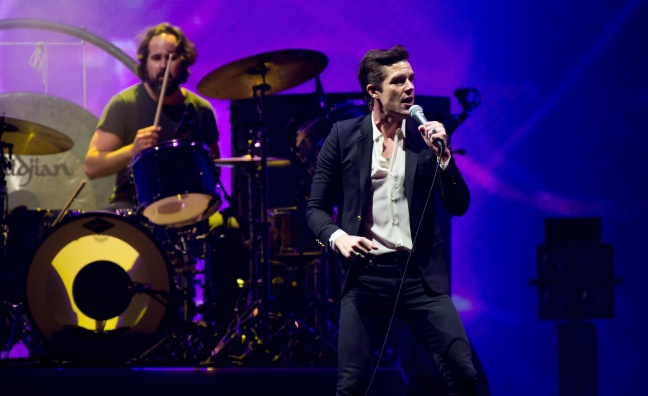 The Killers have spoken of their love for all things UK in an exclusive interview with Music Week.

The band, who completed an extensive UK arena tour last month, return to these shores next year, with stadium gigs in Bolton and Swansea and festival dates at TRNSMT and Isle Of Wight announced so far.

“We've grown accustomed to arenas, so I'm feeling comfortable there and I like that size of a room,” said frontman Brandon Flowers. “I also still like playing small rooms, but I think to actually play stadiums consistently would take a lot of getting used to. I guess I would get used to it and I would adapt. But I'm happy that as many people come that are, it's incredible.”

The Las Vegas' rockers made their live comeback with a secret show at Glastonbury’s John Peel Stage in June, before a sold-out British Summer Time Hyde Park headline set in July, their first UK dates since headlining the 2014 V Festival.

“It had been a long time since we'd played to that many people,” said Flowers. “You can either look at that as some kind of weight to buckle under, or you can look at it as a booster because they're rooting for you and they're all there to celebrate and, thank heavens, that's what it felt like. It felt amazing to be on stage that night and there was a lot of love in the air.”

It had been a long time since we'd played to that many people. You can either look at that as some kind of weight to buckle under, or you can look at it as a booster because they're rooting for you

Drummer Ronnie Vannucci hailed the “dream gig”. “It was awesome,” he said. “We weren't really sure how it was going to go down - being gone so long and kind of having our first return gig back was a little bit scary. It was kind of like a giant cliff dive that ended well!

“[The UK] feels like a second home. They were the first ones to take us in and give us a shot.”

The band also played a one-off gig at O2 Academy Brixton in September – the first time they had performed at the venue since 2006. “It had been quite a while since we'd played Brixton so it was a memory lane-type scenario,” said Vannucci. “It was fun to play that room again."

As well as becoming their fifth consecutive UK No.1 album upon its release in September - a record for an international act - Wonderful Wonderful became The Killers’ first chart-topper in their native US.

Vannucci said the feat had brought the band “a certain amount of vindication or validation”. “I normally don't play into that or pay attention to any of that stats or anything like that, but this was significant for us,” he said. “It was our first worldwide No.1 and a nice ego boost - that’s quickly faded!”