'There's no huge cause for concern': Value of electronic music industry dips 2% to £5.5 billion 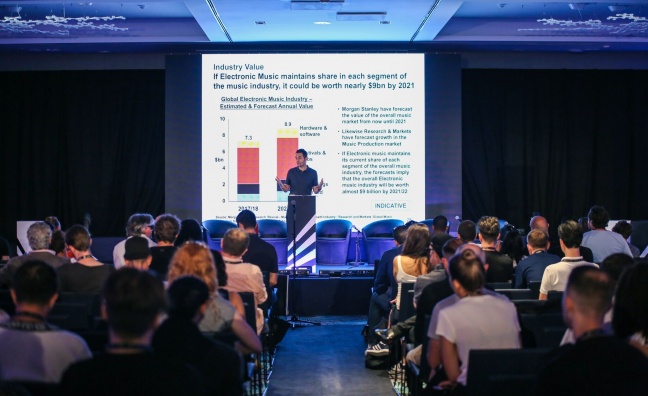 The electronic music business has cause for optimism despite the value of the industry dipping 2% year-on-year to $7.3 billion (£5.5bn), the author of the IMS Business Report has told Music Week.

Kevin Watson delivered the 2018 edition of his annual report on the sector to delegates this afternoon on the opening day of the International Music Summit (IMS) conference in Ibiza.

Having grown 60% in just three years during the boom years of the early 2010s, EDM's growth had slowed to 3% by 2017. The new figures represent the first decline since Watson began compiling the report at the start of the decade, but he does not believe they should set off alarm bells.

“Whenever you have an industry that goes through a lot of growth and then matures you'll always see parts of it dip off," he told Music Week. “We haven’t seen everything fall off a cliff. We remain cautiously optimistic and there's no huge cause for concern."

Watson’s report covers four areas of the business: recorded music, DJs and live acts, clubs and events, and the companies operating within the space.

While dance music's share of recorded music revenue declined in North America, Germany and the UK in 2017, the growth of the overall music business means EDM is projected to be worth $9bn (£6.7bn) by 2021/22 if it maintains its current levels of market share in each segment.

"The music industry as a whole and particularly recorded music is now in actually quite a strong growth trajectory, which is very different to where it was three or four years ago. Electronic is now spreading out to other areas in terms of other genres, mainstream festivals and events booking electronic music artists. If you start to look at all the other areas of the music industry that are growing, electronic is still playing a big part in that.”

The EDM expansion is continuing apace in markets such as Asia, with the number of events held in China set to double in 2018, while Ultra launched 23 new events last year.

“If you're sitting in North America or Europe it might feel like things are coming off a bit,” noted Watson. “But if you're sitting in Asia, you might actually say you're seeing that growth coming through. So I think you're just seeing a bit of migration into different regions.”

DJ earnings rebounded to rise 10% year-on-year, with Forbes estimating Calvin Harris to be the highest earner with $49 million (down from $63m) and Tiesto up to $39m. Global merchandise sales also grew by 30% between 2014 and 2016.

Stay tuned to Musicweek.com for further updates from IMS, which continues until Friday (May 25) at Ibiza's Hard Rock Hotel.