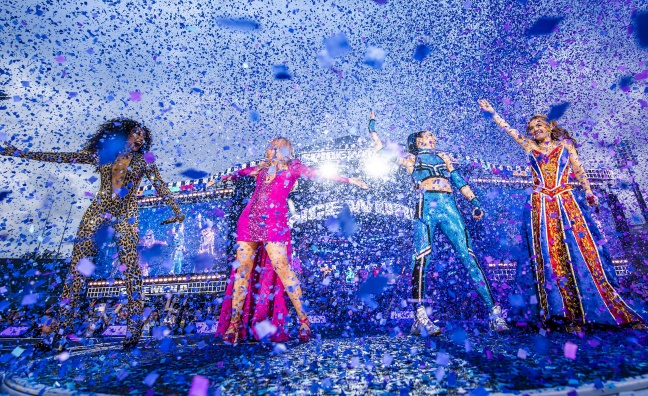 The Spice Girls kicked off their UK & Ireland stadium tour in spectacular fashion at Dublin’s Croke Park at the weekend.

Over 71,000 fans were in attendance to see the show and amongst them was the Spice Girls’ manager, Simon Fuller.

“It was a big one, for sure,” Fuller told Music Week. “As soon as you get to stadiums, you’ve got to ramp it up and it was a good excuse to put together a really fun show. The costumes in particular were really amazing.”

Fuller, founder of XIX Entertainment, has partnered with Modest Management, who masterminded One Direction’s rise to fame, to manage the Spice Girls, who will play 13 stadium dates, ending with three sold-out shows at London’s Wembley Stadium.

“There’s something very special about seeing the Spice Girls on stage. They’re so professional and focused when they get on stage, it was a very special night. They know who they are, and this was a mature show. They haven’t done it for a while and they got to relive that magic of being on stage, with tens of thousands of fans looking at them. They really did have a ball.”

While there were complaints about sound problems from some fans on social media, the reviews were positive, with the Irish Times hailing a “gleeful night of pumped-up pop and updated Girl Power”.

Spice Up Your Life / If You Can’t Dance

Who Do You Think You Are?

Something Kind Of Funny

Never Give Up On The Good Times

Lady Is A Vamp

Say You’ll Be There