'They are peerless in the UK': SJM Concerts MD Simon Moran on Take That's live prowess 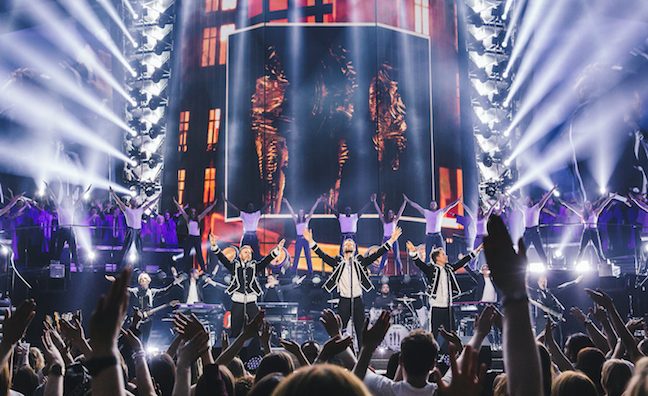 SJM Concerts MD Simon Moran has paid tribute to "peerless" Take That  ahead of the group's 30th anniversary.

The promoter has worked with the band since their 2005 revival, notching up the No.1 and No.3 biggest UK tours of all time with Progress (2011) and The Circus (2009), respectively.

“The ’09 Circus tour did over 1.15 million tickets in the UK and then the Progress tour [with Robbie Williams] did over 1.8m tickets," said Moran, speaking in the current issue of Music Week. “They’re such good people to work with, so appreciative and so great at their job. They are peerless in the UK.”

The subsequent Take That Live (2015) and Wonderland Live (2017) tours have continued to generate immense returns despite the departure of Williams and Jason Orange from the band.

Take That, whose booking agent is Coda’s Sol Parker, hold the record for the most headline concerts at both the new Wembley Stadium (12) and The O2 (29), where they will play a further eight shows as part of their 2019 Greatest Hits Tour.

Kicking off at Sheffield’s FlyDSA Arena in April, the UK and Ireland tour will also visit arenas in Glasgow, Manchester, Dublin and Birmingham, along with stadiums in Milton Keynes, Southampton, Bristol, Norwich, Middlesbrough, Huddersfield, Liverpool and Cardiff.

The group's live business has been imperious ever since 2006's The Ultimate Tour, which marked their return to the stage for the first time since splitting a decade earlier.

“They hit the zeitgeist with the fanbase when they first came around and I suspected, and I was right, that there would be a lot of demand to see them tour again," said Moran.

"They then had a massive second impact with the new music, which was at least as good and arguably better and more popular than the first time around, certainly in the UK.”