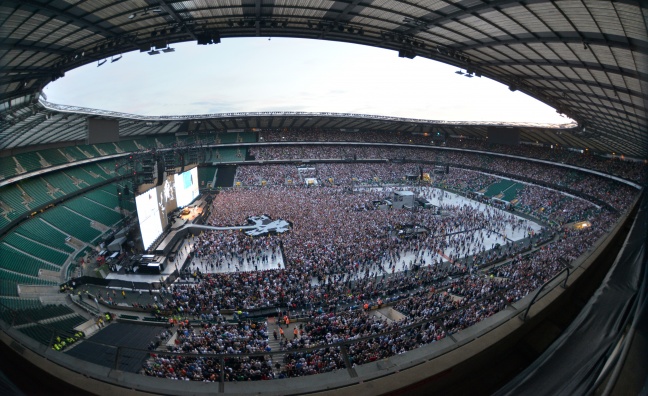 As Twickenham Stadium prepares to launch its summer music programme with The Rolling Stones tonight, the venue is already close to sealing two deals for next year.

The rugby stadium, which currently has a capacity of 55,000 for music events, welcomed U2's Joshua Tree tour for two nights last year. The shows were the venue's first concerts since 2013, when it hosted two dates by Rihanna and the Chime For Change charity concert.

It will also host two sold-out nights by Eminem from July 14-15 and has made significant progress on its 2019 offering.

"We’re well into plans for 2019 and we’re very close to two deals," Richard Harris, Twickenham's head of ticketing, music and new events, told Music Week. "The majority of people buying tickets for U2, The Stones and Eminem are in the local area, there’s a huge demand in west London for live music and we’re well positioned for that.

"The summer shows are here to stay, our events policy is really clear: we’re all about world class rugby which is predominately a winter sport and in the summer we’re all about  great live music and that’s where we’re heading.

"We can offer a bigger window than our competitors and a range of options. We’ve got great transport and a transport plan and for an international artists we’re right down the road from Heathrow which is also really helpful as we found out with Eminem this year."

Tonight's show is the final date on the Stones' No Filter UK stadium tour, which began last month with two dates at London Stadium. The concert represents something of a homecoming for the legendary band, who last played Twickenham in 2006.

"All three [Twickenham] shows this summer are sold-out," added Harris. "The Stones [tickets] flew out the door. A lot of the guys have lived in Richmond and the band originated around here and it was an interesting one securing the deal as while at the moment we’ve got a capacity of 55,000 which is less than the London Stadium or Wembley, but the band had a connection to the local area which was important to securing our place on the tour."