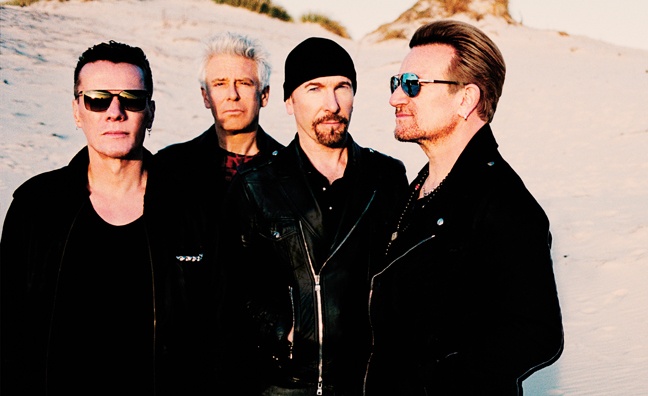 U2 ‘s European promoter has described the reaction to the band’s Joshua Tree Tour announcement as "phenomenal".

The band have added a second UK date after the first night sold out in minutes. They will now play two shows at London’s Twickenham Stadium - from July 8-9 - the first concerts to be held at the home of English rugby in four years. Tickets for the second date go on general sale at 9am on Monday, January 23.

Live Nation Global Touring is producing the tour, which will also see them perform at Dublin’s Croke Park and stadiums in Berlin, Rome, Barcelona, Paris, Amsterdam and Brussels. More than 1.1 million tickets were sold in 24 hours, selling out the entire European stadiun run in one day.

“The wave of support behind it is incredible,” said longtime U2 collaborator John Giddings. “The reaction is phenomenal.”

As well as in London, additional shows have also been announced in Rome, Paris and Amsterdam, as well as in the US in Los Angeles, East Rutherford and Chicago.

The tour marks the 30th anniversary of The Joshua Tree, which features some of U2’s most famous tracks, including With Or Without You and I Still Haven’t Found What I’m Looking For. Each show will include a performance of the album in its entirety.

“I think it is a fantastic idea and I am pleased and proud to implement it,” added Giddings, who is promoting the European dates for Live Nation.

U2’s fifth LP, The Joshua Tree has sold over 25 million copies worldwide and is certified 8x platinum in the UK. In a recent interview with Rolling Stone, guitarist The Edge intimated that the band had put their new album Songs Of Experience on hold to revisit The Joshua Tree, as they felt its themes resonated with the current political climate.

Noel Gallagher’s High Flying Birds will support on the European shows, with Mumford & Sons, OneRepublic and The Lumineers sharing special guest duties for the preceding dates in the US.

The Twickenham gig will be the first to take place at the stadium since June 2013, when it hosted a two-night stand by Rihanna. U2 previously played the venue on their 2005 Vertigo Tour. Its capacity for concerts is 55,000. Tickets went on sale this morning (January 16) priced £35 to £170, with various VIP packages also available.

“We are delighted that U2 have chosen Twickenham to host their only UK tour dates this year,” RFU chief executive Ian Ritchie told Music Week. “Staging such a prestigious event will showcase Twickenham as the versatile and award-winning venue that is, and we look forward to welcoming U2 and their fans in July.”

The band last visited the UK in late 2015, touring arenas in support of their 13th LP, Songs Of Innocence, which was infamously given away free via iTunes accounts in a deal with Apple. It has sold 62,620 copies in the UK to date, according to Official Charts Company data.

The Joshua Tree Tour will mark the first time the band have played an album live, in full, so what chance an Achtung Baby 30th anniversary tour for 2021? “It’s up to them,” laughed Giddings. “I’d love it. Wouldn’t you?”