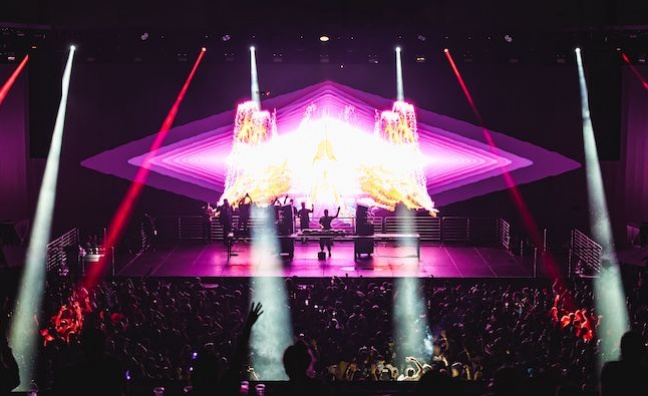 XR creation platform Volta has rolled out a new version of Volta Create.

This new version of the XR platform features designs and worlds used by Bonobo, Jamie Jones, TSHA and more during their headline shows at Glastonbury, and by Nero (pictured), Noizu and Brux at shows at the Brooklyn Mirage.

“Volta Create allows all artists no matter their budget or skill level to create world-class visuals to accompany and elevate their live performances,” said a statement.

Visuals can be employed live and on artist channels for livestreams, as well as across Twitch, YouTube, Mixcloud or TikTok.

In addition to creating live performances, Volta can be utilised for music videos. Imogen Heap used the platform for her recent video to Last Night Of An Empire.

The latest development follows the announcement of a £400,000 grant from Innovate UK, the government-backed agency which drives productivity and economic growth.

The Volta team will also soon be announcing another new feature, which will allow creators to monetise their livestreams via audience interaction, but the platform will still remain free for creators.

DJ Yoda used Volta Create to design and livestream a DJ set entitled Cinema Yoda to his Twitch channel. With the use of the panning camera angle feature, Yoda achieved an immersive feel to his set-up.

DJ Yoda said: “Volta and I built the first iteration of my new livestream set Cinema Yoda. Various camera angles allowed the stream to showcase not only an XR world I have wanted to make for a long time, but a new way to show off my turntables within it. My audience could step into the world of DJ Yoda both musically and visually. This was the first of many performances in Volta worlds to come… keep an eye out for more soon!”

Amnesia in Ibiza recently experienced the first run of the brand new Volta Create. With artists including Horse Meat Disco, Freddy K, Cassie and more, the club was transformed into a 3D mixed reality experience that was real time generated and completely audio reactive.

Volta CEO Alex Kane said: “Volta’s goal is to democratise mixed reality creation for artists. We believe that the new art form will only become normalised when enough people have access to the tools, as well as the time and space to dig in and experiment.”