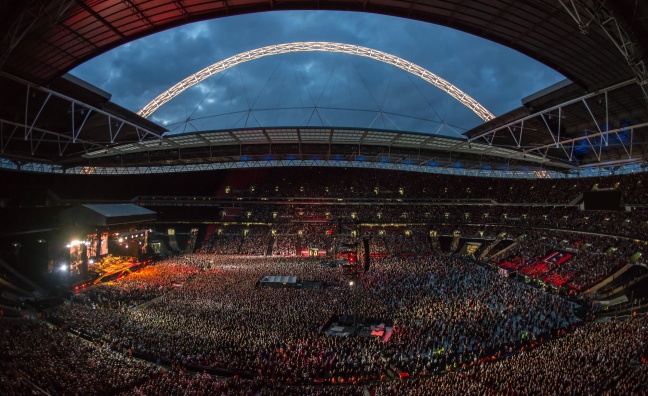 Wembley Stadium's James Taylor says music is "integral" to the venue as it prepares to kick off its summer season with tomorrow's Capital Summertime Ball.

"The Capital Summertime Ball always delivers a fantastic day out with a wide range of chart topping artists and is another strong line up, so we can’t wait for that one," Taylor, Wembley's senior commercial manager, told Music Week.

The national stadium - currently the subject of takeover rumours - has filled all its available dates for 2018, with Ed Sheeran set to perform four nights from June 14-17 and Taylor Swift for two nights from June 22-23.

Though the London venue has had fewer free dates available for concerts due to hosting Tottenham Hotspur's home fixtures while the Premier League side prepared to move to their new stadium, Taylor said live music remained high on its priority list.

"It’s highly valued by our Club Wembley members and has played a huge part in the history of this iconic venue," he said. "We are a multi-use stadium and music is an integral part of our sports and entertainment mix."

"I am now responsible for delivering the music strategy here at Wembley – I took over around November last year and I now have Sam Risner on board supporting me in the commercial team," said Taylor. "We also have a fantastic and knowledgeable events operations team led by Liam Boylan, the stadium’s general manager.

And despite increasing competition in the capital's stadium market from London Stadium and Twickenham, Taylor believes Wembley remains No.1.

"I still believe we offer not only the best facility for music but we also have a strong and knowledgeable events team that makes sure the events are delivered smoothly and efficiently, which is a big appeal to the promoter," he said.

Find out why Taylor is tipping Ed Sheeran to go down in the Wembley record books here.