'We have to beat the touts': Dice announces Troxy partnership 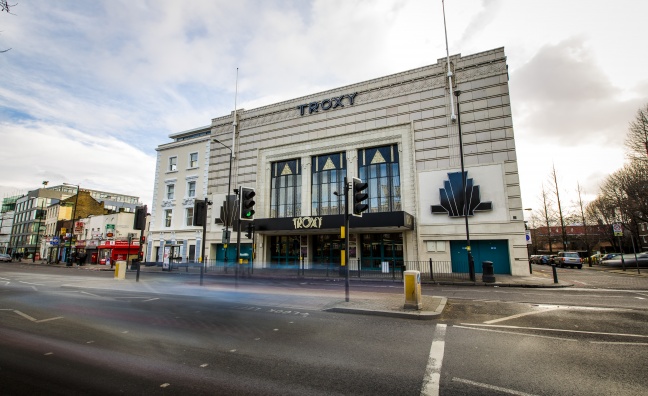 The link-up will see digital-only, anti-screenshot tickets linked to users’ mobile phones to stop touting, as well as allowing refunds up to moments before an event starts.

Tom Sutton-Roberts, general manager at Troxy, said, “Teaming up with Dice showcases a new chapter for us. As the world’s biggest mobile-only venue, we’re embracing innovative technology that favours fans and artists to bring spectacular performances to our stage.”

Russ Tannen, UK MD at Dice, said: “We have to beat the touts. Troxy joining the Dice family is a big win for fans who won’t be seeing inflated prices at this iconic venue. Have you been to Troxy? It’s insane - a beautiful 1930s building that survived a stint as a Gala Bingo to be reborn as one of the most iconic venues in London. The team and owners are as passionate about live music as they are about the building, and that comes through in everything they do. It’s a privilege to be creating the world’s biggest mobile-first venue together.”

The move has been backed by the FanFair Alliance. Campaign manager Adam Webb said: "Dice have been long-time supporters of the FanFair campaign, and this is another welcome step forward to ensure ticket resale works for fans and not touts. Recent legislative and regulatory changes are helping reshape the market, but some of the most exciting developments will involve adoption of new technology that improve the gig-going experience."

Now in its 85th year, Troxy launched as a music venue in 2008 with a show from Nick Cave & The Bad Seeds and has gone on to host acts such as Biffy Clyro, Robbie Williams, Stereophonics, London Grammar, Pixies, Garbage and Patti Smith, as well as the NME and Kerrang! awards.

Upcoming shows at Troxy include Beach House, Rick Ross, The Glitch Mob and an immersive screening of The Rolling Stones' Havana Moon concert.