'What we've got is so unique': Arcadia co-founders discuss their first festival 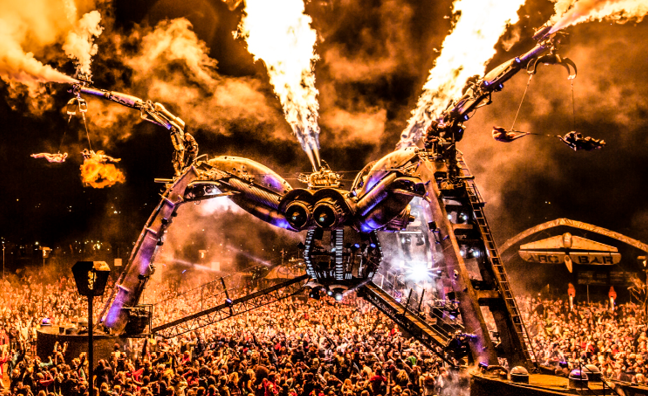 This summer, Arcadia co-founders Pip Rush and Bert Cole are bringing their 50-tonne, fire-breathing spider to London, for their first ever standalone festival.

Arcadia was born at Glastonbury Festival in 2008, after a meeting with Michael Eavis led to Rush and Cole installing what was supposed to be a chill out area at that year’s festival.

It was made, like all their subsequent structures, from repurposed military machinery, and set in motion a process that would lead to Arcadia becoming one of Worthy Farm’s prime attractions, drawing the best names in electronic music to play to thousands of fans crammed beneath its fire cannons and dancers.

In the new issue of Music Week, out now, Arcadia’s founders tell its story and reveal all about what fans can expect from Arcadia London, which takes place at Queen Elizabeth Olympic Park from May 5-6. Leftfield, Groove Armada and Rudimental are among the names on a star-studded line-up.

The full story is available online for subscribers here.

Read on for an extract from our conversation, including the very latest on Arcadia’s first-ever indoor venue, The Reactor…

Why did you decide to stage a London festival?

Pip Rush: We’ve always wanted to do our own gig, and since starting at Glastonbury we’ve pushed the boat out and done shows in Asia, America, Australia, all round the world really. Our 10-year anniversary was coming up and we sat and thought about it pretty hard. Bristol is our hometown and we’ve done the odd event there in the past, we just felt like having been round the world, London is the only place we should be for the anniversary.

Why the Olympic park?

PR: Sound levels were a big thing; you can make a lot of noise there. Space was a big thing too, just to fit everything in. We want to do more than the spider, we want to make it a proper festival, so we needed space for other venues and markets and that stuff.

What will be joining the spider, then?

PR: We wanted to create a real festival atmosphere. We’ve got lots of outdoor activities and various different sculptures coming along, some really cool interactive stuff that we’ve seen at places like Burning Man and always wanted to bring back. We also wanted to make sure that those who want to come and get fully immersed [are catered for]. We decided to create a new, 5,000 capacity undercover venue, a geometric six-sided tent. It’s the most mental in your face rave tent that we could come up with. It’s been fun doing it indoors, you can do massive flames outside but it’s limiting in other ways. One of the big limitations has been lasers, so we’re focusing on some really interesting geometric laser designs inside, and lots of interactions with the performers. Then we’ve got quite a heavy line-up inside that’s going to be kicking off for the two days.

Did you have any concerns about joining a crowded marketplace?

Bert Cole: It’s always hard pushing your way into an existing industry, but I feel like what we’ve got is so unique. It’s been tied into Glastonbury for quite a while which has been amazing, but this is an opportunity to come and see it in an urban environment, it really celebrates a lot of different aspects of Arcadia. The line-up and the feel of the event and the experience will be something completely new.

Why do you think Arcadia has proved so popular?

PR: One of the things we found challenging at festivals when we were younger was experiencing really great music in a big crowd, looking in one direction at the back of people’s heads at somebody on a stage facing you, it’s not that dissimilar to watching TV. We wanted to throw that on its head and include the DJ and also the crowd, being amongst all those people gave us a real buzz. There’s so much more to see [with Arcadia], the scale of the sculpture itself, a 50-tonne fire-breathing spider. Then there’s not only the DJ, there are people on the spider operating the hydraulic limbs, performers flying through the sky, zip wires with mechanical spiders going back and forth… There are about 20 people on the structure operating and performing, all jamming to the DJs music really. It all comes alive. Then we have front of house with another 20-30 people operating lasers, flames and smoke and all that stuff. I think people really enjoy the variety and eclectic nature of it.