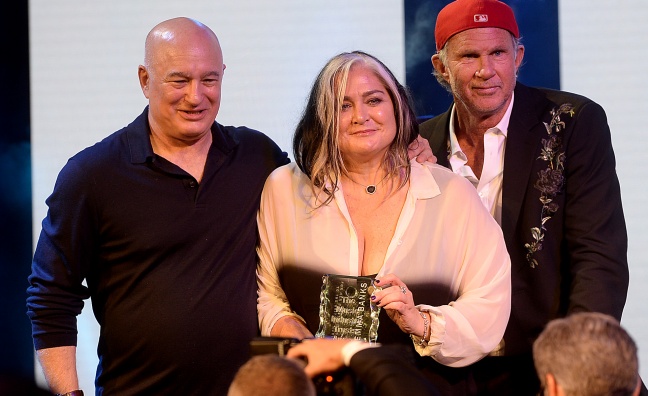 The charity event, held at London's Grosvenor House Hotel, saw performances by Florence Welch, Beth Ditto and Texas - all of whom have worked with Banks down the years, and was presented by BBC Radio's Alice Levine.

"In my wildest dreams I didn’t actually ever expect to get this," she said. "When I started in the industry 28 years ago, I started in the business a couple of years before the MITs started and there weren’t really women in positions of authority, generally. It took 16 years for the MITs to honour a woman – that woman was my lovely friend, Kylie Minogue. Annie Lennox, six years later, won the award and then we fast-forward to 2018 and here I stand as the first female executive, as the first agent and of course arguably most importantly the second Luton Town Football Club vice-president to receive this award in the 27-year history.

"I’ve realised since being announced as the recipient of this award back in May how important today is for so many women. So I stand up here, I hope, as a representative of the many women in the industry who may not have had the opportunity or frankly the inclination to make their voice heard, as I have."

"I’m also incredibly honoured to be the first agent to receive this award," added Banks. "I’ve worked with many of the best agents in the business and I’ve learned so much from all of them. I love the live music business – to be hands on with artists and their teams, to be able to plot and plan a career, it’s a massive buzz. To be able to help our clients achieve their goals is a privilege and it’s one I’m thankful for, literally every day I don’t forget it.

"The business is changing in very many ways but I think the role of the agent is probably more relevant than ever, so that we can make the best decisions with our clients and really protect them along the route."

Revisiting the issue of gender equality in the music business, she added: "In 2018 we look at a live music business that has so many strong female performers, as many as the male ones. These are women that are running their businesses, they’re regularly part of the highest grossing tours list. We’ve got more women in senior positions in labels and management companies and talent agencies, publishing companies, on the radio, just across the whole music business, we’ve come a really long way. There’s always more to do, of course there is but I’m sure that everyone who’s been around for a while will acknowledge that we’re making steps in the right direction and potentially all the other diversity issues that we have in this business – and we probably have more than the male-female ratio these days – they will soon get addressed, I’m quite sure."