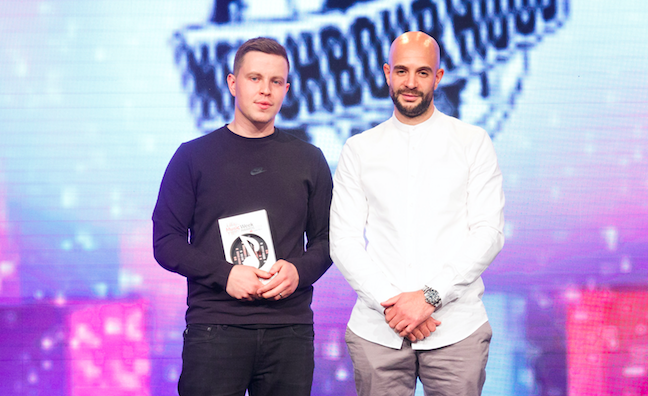 Neighbourhood Management bosses Jack Foster and Benny Scarrs have described the success they are enjoying with Dave’s debut album Psychodrama as “surreal”.

The pair won the coveted Manager Of The Year trophy at the Music Week Awards 2019 in the wake of Psychodrama debuting at No.1 in the albums chart in March. It has a to date sales total of 97,214, according to the Official Charts Company.

This week, Dave could be in line to return to the singles Top 20 as a featured artist alongside J Hus on Mostack’s Stinking Rich.

“The campaign has been great so far, the quality of Dave hopefully helps to make us win something like this award,” Foster told Music Week.

Looking towards the future, Scarrs outlined the pair’s vision for Neighbourhood, which also functions as an independent label and released Psychodrama.

The pair also manage Sir Spyro, and spoke about the thrill of seeing Dave’s record on vinyl for the first time.

“It all feels pretty surreal,” said Scarrs. “We got a delivery of the vinyl press of Pyschodrama recently and to just look at that physically and think, ‘Wow this is our first release on our label” is unbelievable. That has not sunk in.”

Dave, who reached No.1 in the singles chart last year with Funky Friday alongside Fredo, plays a raft of festival dates this summer, including Glastonbury and Reading & Leeds.

“Come and see Dave play his festivals. Come to some headline shows in Europe or wherever else,” said Scarrs. “Let’s keep the album moving. We’ve got things we want to punctuate the year with, that’s what we’re obsessing over every day, week and month, what we’re doing at any given point.”

He added that the aim is for the campaign to “feel natural, fresh and not like you’re forcing it down people’s throats”.

“We’re trying to come up with good, creative ideas to keep Dave on people’s minds,” he said.