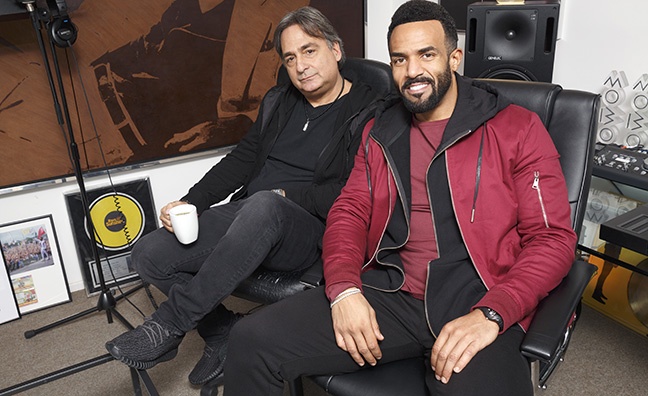 Few artist and manager combos in the music industry can claim to have been through the things Craig David and Colin Lester have.

International success, millions of sales, soaring highs, crushing lows and a time in the wilderness all came and went before a return that offered hope for anyone who’s ever worked in music. Craig David’s reappearance ahead of his Following My Intuition album was less comeback, more ecstatic renaissance. Now, in 2021, he and his manager have a place each on the Queen’s New Year Honours List to reflect on.

When the pair – who are now 21 years into their relationship – starred on the cover of Music Week in January 2018, they talked and talked, telling a never-ending series of stories that made us wonder how they ever get anything done. But their work rate is undeniable, and now their achievements across music and various charity projects has been recognised by Her Majesty.

We sat down with Craig David, MBE and Colin Lester, OBE for another long and winding conversation to gauge their reaction to the news. Not many have experienced the things these two have, and even fewer tell their stories with this much intimacy. And so it is that we find out Craig David has been talking to his plants during lockdown, the duo exchanged “deep, spiritual” books over the festive period (The Alchemist and Living Beyond Time) and that they’re enjoying their new habit of putting the world to rights while Lester walks his dog.

“We work in a bubble in this industry,” said JEM Music Group boss Lester at one point, wearing a grin. “For me, taking my dog for a walk is a [source of] escapism that I’ve never done before with such regularity, it’s quite amazing. My dog is pretty much like an artist, you tell them an instruction and they don’t really listen to you. But eventually they come back.”

And that's really how a conversation unfolds with these two when they get going. Look out for part two of our chat very soon. For now, they reflect on a landmark achievement...

It must feel pretty good to have received these honours at the same time…
Colin Lester: “It’s complete and utter coincidence. They were totally independent of each other. I didn’t know about Craig until the morning of December 30, we weren’t allowed to talk about it until 10:30pm that night. I got a call from News International asking for comment on Craig David’s MBE, I was like, ‘What MBE? Really?’ Here was someone who I’ve managed for 21 years and we’re great friends. I called Craig and asked if he had something to tell me, if he’d been holding back a little secret. He started laughing and that was it. Bless him, he really had gone to the letter of the law in not talking about it, he didn’t tell his mum, dad, me… He didn’t tell anybody. Actually, he might have told his plants – Craig’s become a keen gardener during lockdown.”

Craig David: “The plants? No, I think they already knew, they were ahead of the game. They could feel it, man.”

Why do you think you’ve received these awards?
CL: “It’s important for me to say that I’ve worked with some amazingly talented artists and executives in my career and, without them, I wouldn’t have been able to achieve what I’ve achieved. I know people say that, but it’s really true. I’ve been overwhelmed by the amount of emails and messages I’ve had with congratulations. Totally overwhelmed. I’ve said to so many people, ‘Without you, I couldn’t have achieved this’. And that’s so important. It’s not just me. Without other people, and people making me look good some of the time, it would never have happened. And I’m not trying to be over humble; I’m just being honest. I think it’s important. Surround yourself with good people, people who are better than you.”

The most important thing we all have is integrity, the minute we give that up, we give up everything

CD: “It’s the opportunity Colin gave artists to do what they do, but with good management, someone who gives a great platform for them to do what they do and enables them to focus on creativity. All the artists Colin’s worked with have careers that span years, and that’s all because they have great teams, and when I say that, I mean someone you can trust in your camp. And I’ve had that for 20 years, which has allowed me to have a career doing what I love without thinking, ‘Oh I’ve got to get this business thing right, or do that’. I don’t worry about that. And Colin has been able to do that for so many artists, so yes, you truly deserve an OBE for services to music. And outside of that, what you do for charity, you just do that from your heart, it’s how your are with your family, with your kids. It’s an honour you already had, now it’s just been bestowed, you’re gonna meet the Queen, she’s gonna put it on you and say, ‘Yes!’ I’ve known that all the time I’ve known you, and I’d imagine other artists would say the same thing.”

CL: “I appreciate it Craig, but the most important thing we all have is integrity, and the minute we give that up we give up everything that surrounds us and our reputations. I’ve always maintained our integrity and you can see how quickly it goes. That’s what I’ve always done for artists. Art is artists. It’s their art we’re trying to get across and if we don’t want to take their art, work with it in their realm and help them, then we shouldn’t be in this industry. The sun is around the artists, that’s the most important thing. Craig, you were on the list because of your incredible contribution to UK and global music, I’m so proud of that, I  think it’s incredible, I really do.”

What does it mean to you, personally, to be recognised this way?
CL: “The most important thing is being awarded something by a country who took my father in, he came to this country as a holocaust survivor in 1945, with nothing. Most of his family had been murdered in the concentration camps and this country gave my father a home, allowed him to live again and build a family. For me to be honoured by the country that gave my father that opportunity is one of the greatest honours, and my saddest moment is that he’s not here to see it, but I know he’s looking down on me. That’s the most important to me.”

Having a No.1 song or loads of streams, are fleeting moments, this is about the long run

Two prominent figures in music winning places on the Honours List shines a light on the work the industry is doing. What do you hope might come of that?

CL: “I hope that seeing this is an inspiration to young managers that come into this from any walk of life, it doesn’t matter whether they’ve had a tough start, to see that they can achieve things. I started as a musician managed by Don Arden, he was legendary for being a very tough guy. That was my first experience in the music industry, when I signed to his label. Having come through all the various things I’ve done since then… where I was thinking about paying the rent, not receiving an honour. It’s possible for anybody to receive some form of honour and appreciation, whether it’s from the industry or the country, if they are just true to themselves and are fair in what they do. And that, I hope, is an inspiration to future managers and managers who are working today.”

CD: “I agree completely. As an artist, what I’ve seen over 20 years is that it’s a roller coaster ride. You ask questions like, ‘How much do you want this? Are you really a true musician?’ Any artist who has a long career is going to have moments where you’re at the top of your game and you seem to have the Midas touch, and there’s going to be other times where it’s a lot harder, and you find your real character comes in those lower times. Something magical happens in those moments. My take on this is that it’s the long run, it’s not just a No.1 song or getting a load of streams one time, they’re very fleeting moments. This award, for both of us, is about the long run, it’s not something where you have a No.1 and suddenly it’s, ‘Here you go, here’s an MBE.’ It doesn’t really work like that. It’s how consistent you’ve been over a period of time and how you’ve ridden the rollercoaster. Both of us have had experiences within the music industry and just in life. This is a beautiful moment that we can celebrate at the same time and shine a light on the fact that music industry is thriving.”

Look out for part two of our conversation with Craig David and Colin Lester on musicweek.com very soon. Read our cover story with the pair here.