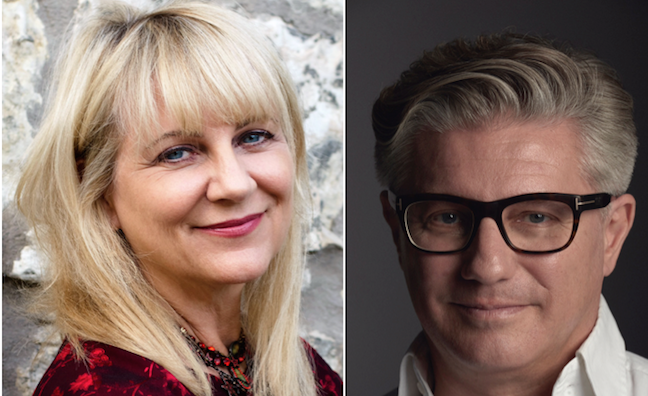 Nostromo Management's Paul Craig, co-manager of Biffy Clyro, has been elected to the new role of vice-chair, in the wake of yesterday's AGM, while Stephen Budd (pictured, right), of Stephen Budd Management, who served as co-chair with Wagg since 2014, has stepped down to focus on a number of upcoming projects, including the Give a Home concert series promoted by Amnesty International and Sofar Sounds for World Refugee Day.

“Working with Stephen these past three years has been a pleasure," said Wagg (pictured, left). "He’s one of the industry’s best loved characters and sharpest entrepreneurial operators. Together we’ve overseen the continued development and progress of the MMF as a trade organisation that represents and is relevant to the full diversity of the UK’s music management community. That work carries on to create a transparent and fair world for all artists, including well over a thousand of the best acts on the planet who are represented by our ever increasing membership.

"While Stephen continues to break new and exciting ground with the Give a Home concert series, I am delighted to welcome onboard Paul Craig, who has played such a fundamental role in developing Biffy Clyro into the all-conquering festival-headlining band that they are today, as our first ever vice-chair.”

Budd said: “Coming to the end of my three-year term as co-chair, I’m delighted that Diane has agreed to stay on and that Paul Craig, who I have known well for over 20 years, will assist her as vice-chair. It's been a privilege to help the MMF grow and develop its program over that period and I will continue to serve on the board."

Designed to increase diversity and inclusivity, the move will see the organisation’s 16-person board rotate on an annual basis - with members elected to serve a fixed three-year term, and with at least five members required to stand down each year to make way for a newly-elected group.

Brian Message (ATC Management) and Paul Burger (Soho Artists) have also been re-elected to the board.

Outgoing board members Carol Crabtree (Solar Management), Gary McClarnan (Sparklestreet), Ian McAndrew (Wildlife Entertainment), Scott Rodger (Quest Management) and Tim Clarke (ie:music) were all elected into the newly-formed MMF Custodians - a group consisting of some of the UK’s most experienced and esteemed music managers, who will meet on a bi-annual basis to help advise on MMF policy.

Commenting on the newly-formed board, MMF CEO Annabella Coldrick said: “The constant challenge for all trade bodies is to balance continuity with relevancy - to ensure you can deliver the services and lobbying demanded by your existing membership, while providing the pathways and encouragement for a new generation to get involved.

“It is a constant cycle, but having added 100 managers to our fold in the past year I believe the MMF is now starting to reach that sweet spot where members can get involved at a level that works for them, and regardless of background or genre they represent.  On that front, I must pay tribute to Paul Burger who, as Chair of our Governance Committee, has undertaken an immense amount of work behind the scenes to develop more clearly-defined rules of Governance and to ensure the MMF can go forward on a stable and coherent footing.”