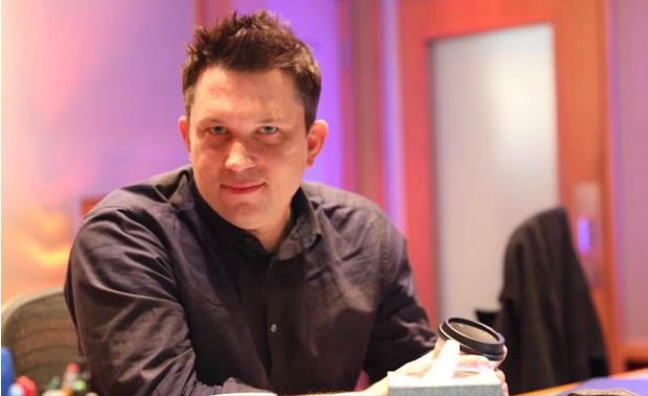 Sting & Shaggy are touring the UK together this week, promoting their unlikely collaboration album 44/876. Released last year, the album peaked at No.9 in the UK and has sold 24,173 copies to date, according to the Official Charts Company, as well as winning a Grammy for best reggae album and becoming a hit across Europe.

The man who put the odd couple together – and who’s been behind many huge hits over the years – was Martin Kierszenbaum, Sting’s manager and Shaggy’s former A&R man, who introduced the pair, initially just for Sting to do a guest vocal on a Shaggy song called Don’t Make Me Wait.

But the pair hit it off over their shared love of reggae and a whole album, executive produced by Kierszenbaum, was the result. Kierszenbaum now also manages Shaggy.

Kierszenbaum, of course, has had a lengthy and fascinating music biz career as a songwriter, producer and A&R man. He’s also recently made a return to his own artist career – he was formerly in Maroon and released songs under his alias Cherry Cherry Boom Boom – releasing songs such as My Ann Arbor and Fine Dopamine under his own name.

But many in the biz will know him as founder of label/publishing/management company The Cherrytree Music Company and through his time as president of pop/rock A&R for Interscope, where he A&R-ed many of Lady Gaga’s early recordings.

So, as Sting & Shaggy’s tour continues around the country, Music Week sat down with Kierszenbaum to talk Sting, Lady Gaga and why the record industry is more exciting than ever…

Was it hard to get two such big names working together?

“No, everything happened very organically. It all stems from the fact that musically, they have a connection point and they’re comfortable creating with each other and improvising. Sting is usually a woodshedder, he goes into a room, writes a song and comes out with it. Shaggy is much more of a public creative, he’ll stand in front of a crowd and improvise. It was fun to see them meet in the middle, Sting became much more improvisational and Shaggy became a bit more meticulous. It was interesting to see both of them apply their message and then come up with something unique.”

How did you manage to get them so much airtime on the 2018 Grammys?

“It was just timing. I’d love to say we had this incredible strategy, but the fact is we were putting the finishing touches to the record in New York. The Grammys had moved back to New York after 15 years of being in LA. The producers were interested in having some New York themes, so they reached out to Sting to sing Englishman In New York. Then, when they found out Shaggy was making a record with Sting, it caught fire and went from there. I’d love to say it was planned world domination, but it was just serendipitous!”

Cherrytree was under the Universal umbrella for many years. Why did you go independent?

“We had a really great run which lasted almost exactly a decade with our partners. But I’d been diversifying the services at Cherrytree for a while. I was really interested in management, the management company kept growing and we had an opportunity to add Sting as the jewel in our crown. Sting is signed to Interscope, so I was much more comfortable being outside of Universal managing such an incredible artist that’s signed to Universal. It removed any potential conflict. A lot of people don’t have a problem with that but I don’t like it. When the 360 degree model was all the rage, Cherrytree was not doing 360. Because when we’re a manager, I like having a label, an agent and a publisher and winning together. I like having a brains trust in the room, I don’t like being the only person in the room because, if I hit a roadblock, I can’t ask somebody else. Yes, a lot of times we were the driving force in breaking artists which would benefit our partners. But there were other times when our partners brought an opportunity. The new structure enables us to maximise that.”

What are the advantages of being independent?

“The transparency of distribution and marketing. Now you can put out a record without having to have an intermediary to get you retail space or distribution. You can record in a cost-effective way so it’s not prohibitive. That’s put the power into the musicians and the repertoire developers’ hands. At Cherrytree, we were always coming from a subculture and crossing over, but to me it was just being musically progressive and having the mainstream eventually come to you, rather than the opposite. You don’t want to dilute an artist’s vision. So the set-up of the company, being both independent and across several services, is music led. We’re very nimble, we can work with any producer or partner, we’re not beholden to anyone and that means more opportunities for our clients.”

As Sting’s manager, how do you balance his multiple projects?

“Sting follows his musical compass, that’s what I admire about him. It inspired me before I even knew him. He seems to do things for musical reasons and you can never go wrong doing that. That’s what attracted me as a fan and that’s what I work hard to preserve his ability to do. He leads his audience into new and unchartered musical waters and that’s the lifeblood of popular music.”

What do you think of how Lady Gaga’s career has developed since you worked with her?

And how do you feel about the music business these days?

“I’m super gung-ho about it. People always say the music business has changed. I was hired to do international publicity at Warner Bros in 1989, the tail-end of the Mo Austin and Lenny Waronker era, which you could argue was the best record company of any time. I showed up for work and a lovely gentleman who ran sales called Lou Dennis came up to me and said, ‘Hey kid, welcome to Warner Bros. You missed the heyday of the record business!’ He was being funny and encouraging but here we are in 2019. I’m still in the record business, I’m able to support my kids, put food on the table, pay my rent. People have always said the record business is not what it was, but the fact is, it’s always been dynamic, it’s always changing. So it’s changed monumentally in the last five years, but it also changed in the five years before that and the five years before that. That’s what I love about it. I find it thrilling to find a way to adapt and excel within that dynamism. Like pop music, it’s constantly shifting, like culture it’s always moving. So I’m focused on the very positive aspects of this new streaming paradigm. It’s an incredible time and I’m very bullish about it.”