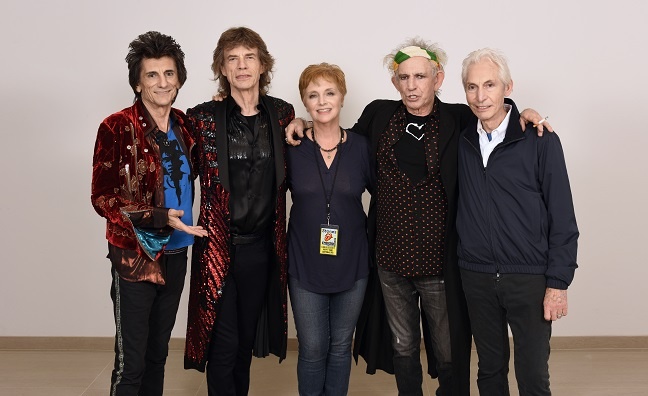 The Stones have kept busy since Smyth succeeded the late Prince Rupert Loewenstein in the role in 2010, with their 50th anniversary, new music, multiple tours, a landmark gig in Cuba, festival headline slots and their acclaimed exhibition all in the books since then.

Yesterday, the band announced their No Filter tour would be visiting US stadiums in spring/summer 2019 and Smyth, who was previously the group's lawyer, hinted more activity would be in the pipeline.

"We're looking at potential things for the future across all spectrums – live, new music – new opportunities that I have to keep under wraps, but new ideas," she said. "The exhibition is out in Sydney [at the moment] and will go to Tokyo, then we want to get it back to Europe and revamp it a little bit to give people an even better and more interactive experience."

The Stones announced a new worldwide agreement with Universal Music Group earlier this year and brought their No Filter tour to UK stadiums in May.

"A lot of acts are able to say, 'In 2020 we'd like to do 20 shows and we know now that we're doing it.' We don't – it is always a bit lastminute.com – and that is the nature of the animal now because you have to see how things go," said Smyth. "So if we decide, 'We want to do it, let's aim for six months' time,' you're already up against it. But that's the process and it has been working well since 2012, to do it in bites like that.

"It's remarkable to look back and think we are now in 2018, looking ahead to 2019, still on the live [circuit], but anybody who's seen them will tell you they have got better and better."

Smyth, who was named Businesswoman Of The Year at this month's Music Week Women In Music Awards, is confident that things are changing for the better for women in the music business. “There has been a dearth of women,” she said. “But you’ve now got very, very good women at the top of the tree – in record companies and publishing companies – who are getting promoted and one would just hope that that can continue.

“I’ve never felt a gender issue, but I may be very lucky in that regard by being in a law firm that had women when other firms didn’t at senior level; by being allowed by The Rolling Stones to do the job I do; and I hope women are being given that opportunity, because it is hard. It’s incumbent on those of my generation that, if we can do anything to help mentor, we should."