The Killers' manager Robert Reynolds talks Wonderful Wonderful, Battle Born and the future of the album 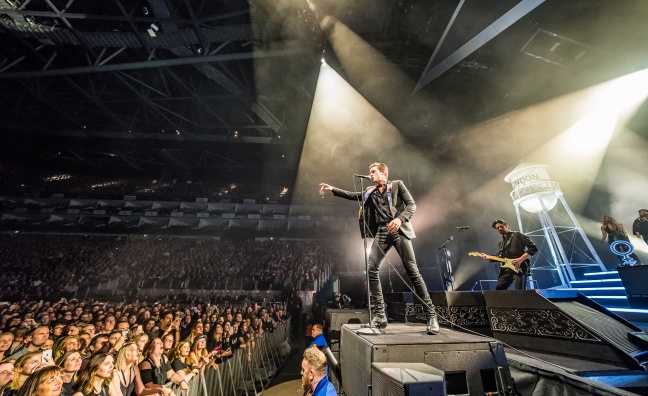 The Killers' manager Robert Reynolds has praised the band's talent and hard work for helping them bounce back from their "difficult" fourth album Battle Born.

The Las Vegas rockers achieved their first US No.1 last autumn with Wonderful Wonderful (Island/Virgin EMI), their first album in five years. The LP also became their fifth consecutive chart-topper in the UK, where it has been certified gold by the BPI with current sales of 128,906, according to the Official Charts Company.

"I knew how hard they'd been working," Reynolds, of Reynolds Management, told Music Week. "They're all very talented musicians and songwriters and if you mix that with a good work ethic and vision, you've got a recipe for success. I also knew that the band wouldn't settle for anything less than an album they were extremely proud of - and so if they took another year to write and record that album, we were going to take another year.

"It's obviously our fifth No.1 album in the UK and it was our first No.1 album in America and in some other territories, so I'm thrilled with how well it's done. Of course, I think all of The Killers [albums] deserve to do well and reach No.1, but I was very happy to see that happen after the long break."

"Battle Born was a difficult album to make for various reasons and not seeing the success that we expected was frustrating for everyone," conceded Reynolds. "That said, there are songs on Battle Born that The Killers and their fans continue to love, and there are other songs that maybe aren't in the setlist from Battle Born that perhaps didn't get the chance they should have. So while it may not be perceived as in the Top 3 or 4 albums by some fans - and maybe even Brandon on some days - we're still proud of Battle Born as a body of work and as part of the catalogue."

"It's always hard to choose the first single," added Reynolds. "The idea of picking one song that so many fans think is representative of the type and quality of the album is nearly impossible.

"When you look at every Killers album, there's so much diversity - you could actually hate The Man and [still] love the album. There are songs on the Killers album that are very different to The Man that would never be a first single or even a single, but are still fantastic songs and unfortunately in today's short attention span, single-driven music economy, deeper tracks don't often get the attention they deserve."

Reynolds elaborated on his frustrations with the modern, track-driven culture. "I think that people want tracks more than they want albums," he said. "I even look at my own listening habits and I like to form playlists on Spotify that doesn't encompass entire albums - there'll be one or two songs in a row from one artist and then I'll jump to another artist and another album - and that's the way I listen now, so I can't hate on the music-buying public for doing a similar thing.

"At the same time, if you focus only on releasing singles, you miss out on a lot of the best music. The album format allows artists to put out songs that maybe aren't as accessible immediately - in terms of tempo and getting to the chorus and the hooks and everything else that radio's looking for - that are fantastic songs nonetheless.

"I don't know if we have to stick with the album format per se, but we certainly have to have a way that music is created and released that allows for, and appreciates, deeper cuts and diversity in terms of what any artist can put out."

The Killers, who completed a sold out UK arena tour in late 2017, return in th summer, with stadium dates in Bolton and Swansea confirmed alongside festival headline slots at Isle Of Wight and TRNSMT. "We've got a good, long tour ahead of us," said Reynolds. "And then after that, of course, we'll write another album and do it again."

A special feature on The Killers, featuring interviews with Flowers and Vannucci, Reynolds, agent Kirk Sommer, label boss Clive Cawley and promoter SJM Concerts, appeared in the Christmas double issue of Music Week. It can be accessed online here. In addition, the band talk touring here and line-up changes here.