'The manager is the only person dealing in every aspect of an artist's life': Modest! founders are a hit at the MITs 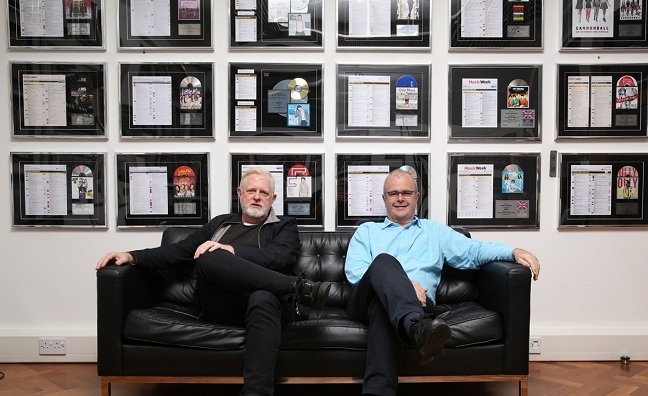 The great and good of the industry were out in force, both in the room and on the big screen, to pay tribute to the quintessential modern management duo for their incredible 40-year careers.

But it was the tribute video that really got people talking. After being hailed by the likes of Barbara Charone (who compared them to “Lennon & McCartney or Morecambe & Wise”), Steve Barnett, Emma Banks, Little Mix, 5 Seconds Of Summer, Rob Stringer, Sir Lucian Grainge (“Everything you’ve touched in both your careers, you’ve won at”), Clive Davis, Ozzy & Sharon Osbourne and four members of One Direction, the video morphed into a spoof of The Office.

This saw Murs and Horan play the management duo and featured hilarious cameos from the likes of Mike McCormack as a chef, Emma Banks as a cleaner and Jo Charrington and Nick Raphael as a wannabe pop duo called #Jonick.

The pair were then presented with their award by Modest! partner Will Bloomfield and film director Richard Curtis, an old school friend of Griffiths, who praised them for being “the opposite of what you see as managers in every movie”.

The management duo, who appeared on the cover of Music Week last week to celebrate their win, then took to the stage, with Griffiths paying ironic tribute to former BMG Entertainment boss Rolf Schmidt-Holtz, who fired the pair in 2001, leading them to team up in management.

“If it wasn’t for that fucking idiot…” he quipped. “We are truly honoured by the fact that we are the first managers to be presented this award. It’s a late acknowledgement by the business of the importance that management brings to all facets of our business. It’s something that people need to be much more aware of. Working with management closely is going to help you do much, much better with your artists.

“Managers have generally not been looked upon in the right way by the business and I hope this will be the start of the industry as a whole starting to really take into account what it is that managers do,” he added. “The manager is the only person who is dealing in every aspect of an artist’s life. That is very different to being an A&R person, a video person, an agent, a publisher or a marketing person. The manager is the person who has to pull all those bits together and make sure that it’s going to work. That’s what we do and we do it fucking well.”

Magee led the tributes to Modest!’s staff and industry partners, as well as all those who have helped the duo along the way and his partnership with Griffiths.

“We’ve build something special over the last 17 years,” he said. “We’re in a creative business and relationships are very important, not only with our artists but with the people we come into contact with. It’s not a nine-to-five job, especially in management so bonds and friendships become important because the commitment to what we do is often above and beyond. What we expect from our people and what our artists expect from us is something special.”