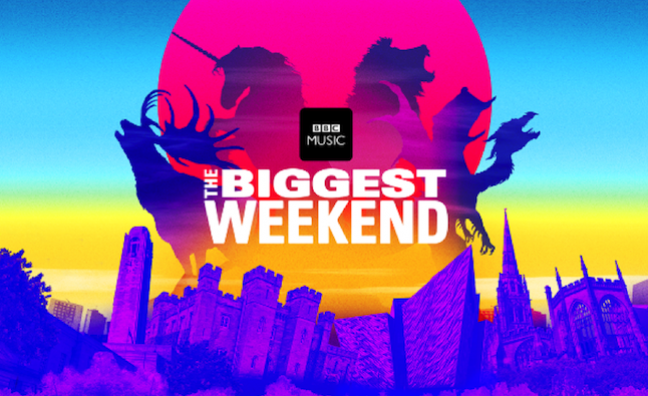 BBC Music has unveiled the line-up and locations for The Biggest Weekend, the one-off event which is taking place on the late May bank holiday weekend (May 25-28).

The expanded version of Radio 1’s Big Weekend will be staged over four sites in four nations across four days with over 175,000 tickets available to the public. Partly designed to fill the gap left by Glastonbury in a fallow year, it will be the BBC’s biggest ever celebration of music across TV, radio, online and mobile.

Taylor Swift and Ed Sheeran will be performing in Swansea for Radio 1, Noel Gallagher’s High Flying Birds are set to play Perth for Radio 2, and Beck, Courtney Barnett, Manic Street Preachers and Public Service Broadcasting are lined up for a BBC 6 Music weekend in Belfast. A site in Coventry will feature Radio 2 and Radio 3 performances from artists including Billy Ocean, Snow Patrol, Eliza Carthy & The Wayward Band and Nigel Kennedy with the BBC Concert Orchestra.

Unveiled during breakfast shows on BBC Radio 1, BBC Radio 2, BBC Radio 3 and BBC 6 Music, the line-up celebrates the “incredible breadth and diversity of live music on the BBC”.

Bob Shennan, Director BBC Radio and Music, said: “The Biggest Weekend is going to be a once-in-a-lifetime festival for everyone that loves music, whether they are at the venues in person or enjoying the whole spectacle of performances being streamed through iPlayer along with all our TV, radio and digital networks. Wherever you are in the country, you will be part of the biggest music event, with the widest selection of musical genres, the BBC has ever put on.”

Ed Sheeran said: “So excited to be part of The Biggest Weekend this summer! I’ve always loved performing at Big Weekend with Radio 1 and this year it’s going to be even bigger. Bring it on Swansea!”

Manic Street Preachers said: “The Biggest Weekend is in Belfast, which is good in itself. We’ve played there a lot over the years, we did one of the greatest gigs ever there back in The Limelight in 1990. And then we’ve had subsequently just lots of great gigs there, just amazing ones. It is good to spread 6 Music’s message far and wide.”

The Biggest Weekend is being hosted by BBC Radio 1, 1Xtra & Asian Network, BBC Radio 2, BBC Radio 3 and BBC 6 Music. There will be extensive TV coverage on BBC One, BBC Two and BBC Four and sets will be available on BBC iPlayer, mobile and online.

Tickets for The Biggest Weekend go on sale on February 12 and Ticketmaster is the official ticketing agent. Tickets will be geographically weighted with a percentage available to each of the local areas.

The four locations, dates and artists confirmed are: