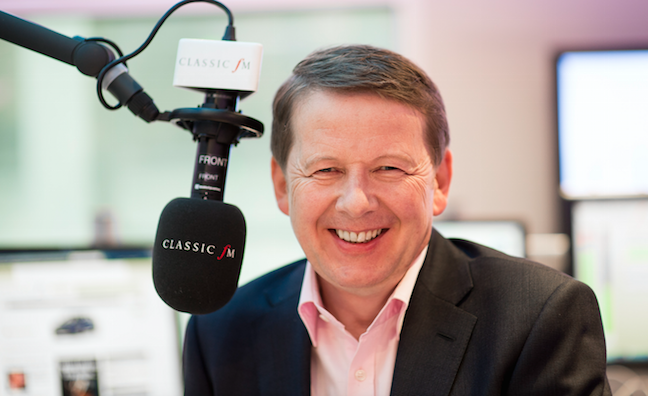 Classic FM has announced details of its 25th anniversary celebrations, including the commission of several new compositions, a programme of special commemorative broadcasts and a brand new radio series dedicated to video game music.

The station, which launched on September 7 1992, has grown significantly over the past 25 years, now reaching seven million people across its platforms every week.

To mark its 25th birthday, Classic FM has partnered with the Royal Philharmonic Society (RPS) to commission six brand new pieces of classical music, written by composers aged 25 and under. The Classic FM 25th Birthday Commissions with the RPS will champion up and coming UK talent. Composers who were born on or after Classic FM’s first broadcast in 1992 are welcome to apply, with each new work premiered at one of the station’s 25th birthday events and recorded live for broadcast.

The station has also announced the UK’s first weekly radio series dedicated to video game music. The six-week series will start on April 22 and will run every Saturday from 9pm to 10pm.

In addition, Classic FM is dubbing April its Live Music Month, which will see the station team up with its orchestral partners including the Royal Liverpool Philharmonic Orchestra, the LA Philharmonic and the City of Birmingham Symphony Orchestra, to broadcast 18 exclusive concerts from around the world. The programmes include a concert by the Hull Philharmonic Orchestra featuring the world premiere of a new work by Sir Karl Jenkins. Each concert will be broadcast during the station’s weeknight programme, The Full Works Concert.

On Thursday, September 7, a special concert will be staged at Liverpool Philharmonic Hall, hosted by Bill Turnbull and broadcast live on air. Classic FM’s 25th Birthday Concert with the Royal Liverpool Philharmonic Orchestra will feature repertoire associated with the station, such as Handel’s Zadok the Priest, which was the first ever piece of music played on Classic FM in 1992, and Bruch’s Violin Concerto No.1, which entered the first ever Classic FM Hall of Fame at No. 1 in 1997. Tickets will be on sale from Tuesday, April 4.

Sam Jackson, Classic FM’s managing editor, said: “Twenty-five years after we switched on Classic FM’s transmitters, our mission remains the same: to make classical music accessible to as broad an audience as possible, no matter what their age, experience or background. When the launch of the station was announced, many people predicted its demise but, a quarter of a century on, one in 10 adults in the UK now listens to Classic FM each week and our digital reach has cemented our position as the world’s biggest classical music brand.

"Our commissioning of music by young composers and our support for live concerts across the country are two of the ways in which we will continue to showcase the wealth of classical music talent in this country. We are immensely proud to reach 7 million people each week, and we’re very much looking forward to welcoming even more people to Classic FM this year.”